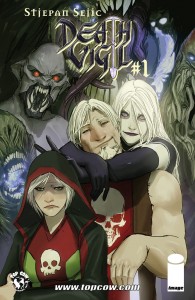 I’ve been reading comics a long time. I rode my bike to pick up the first issue of X-Factor back in ’86. I’ve been reading comics for close to 30 years now. So it’s a rare thing when a book catches me by surprise. Somehow, someway, Stjepan Šejić’s Death Vigil snuck up on me and knocked me flat on my back with it’s pitch perfect storytelling and artwork. And I have to tell you it was a great feeling. If only my day job could make me feel this way.

Death Vigil is the solo effort from long time Witchblade and Top Cow alum Stjepan Šejić. I’d love to say I know how to pronounce his name but I’d be lying to you. Semantics aside, Šejić has put together a fantastic fantasy/action/horror title with some gorgeous visual appeal. Let’s dig in shall we?

Death Vigil is the story of Death, also known here as Bernardette, and her Vigil, a team of immortals sworn to protect all of earth from the horrible creatures from another plane of existence. As Sam, one of the main characters and the first hero we meet from the Vigil, puts it, the Vigil is “ancient league of immortal protectors burdened with duty of preventing the primordial enemy from escaping the Underplane of existence and devouring all life.” Sounds pretty cool right? I thought it was pretty cool. Sam and Bernardette are locked in battle with the Necromancers, bad guys determined to take down the Death Vigil with all manner of nastiness. They’re a nasty bunch, attempting to summon evil entities from the Underplane to defeat the Vigil and literally unleash hell on Earth.

What makes Death Vigil #1 so much fun is two-fold. Šejić’s writing is filled with humor and a lighthearted familiarity that instantly makes you feel connected to every character. There’s just a casual air about each one, even the bad guys, that makes it seem like you’ve been reading about them for fifty issues already. His sarcastic, dry tone is great too, it’s a form of humor I especially appreciate. The writing is superbly backed up by his fantastic art. It’s just flat out gorgeous. Even though Šejić seems to be employing more of a sketchy style here than in his past work on Witchblade or Artifacts it’s still chock full of his typical attention to detail and brimming with special effects. The guy is a Photoshop master, whatever tricks he’s hiding up his sleeve are in full effect here. Even the small touches are great, like special speech bubbles and lettering for different characters down to the embroidery detail on Bernardette’s cowl. I like that Death Vigil is a little looser than his older work, it lends itself better to the story and allows for the characters expressions and mannerisms to really shine. Especially the expressions, I found myself going back over the faces in every panel, there were so many perfect and hilarious looks to be found. As for his characterizations, they’re all so great. Bernardette may be feminine (and kinda hot for the Grim Reaper) but she’s not overly sexualized and still evokes an image of power with some medieval flair to her costume. Sam, Clara, Hugin and the rest are all equally well designed and are definitely not your typical muscle-bound superhero fare.

I’m not sure if my sheer enjoyment of this book was a perfect storm of unsure expectations, excellent presentation, warm sunny weather and ideal levels of caffeination, but it doesn’t matter. Death Vigil is a great ride from beginning to end, and if you’re open to a humorous, beautiful, action packed look at Death and the unseen forces fighting all around us then you should definitely pick up this book. You should also pick it up because it’s a damn fine comic book. I know I’m very excited to see what Mr. Šejić has in store for Bernardette, Sam and the rest of the crew. I also hope someday I figure out how to properly pronounce his name so I can stop butchering it.

Score: 7 (out of 7) The Greater Banshee that attacks Sam is truly the stuff of nightmares. If I’d have seen that thing in a comic at the grocery store 30 years ago I’d have just stopped reading comics right then and there.