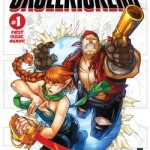 I like to be upfront when writing on the site because I want to express everything in my head. In the recent weeks, I’ve kind of been down on the comic industry. I found myself reading books more out of habit than enjoyment. Then Â Uncanny Skullkickers #1 came into my life, and reminded me in a single issue why I love this medium, and really re-ignited my personal passion, at least for now.

What makes Uncanny Skullkickers #1 so special? I think that it is so self-aware without being too self-aware.

Take the title/number of the comic for example. They poke fun at the comic’s industry’s habit of rebooting/renumbering/rebranding the same comic series to help drive up sales and awareness. It plays up with that by referencing it on the cover of the comic, but to REALLY drive home the point it starts with a 2 page recap of what has happened so far in the series.

Now this is my first issue of any Skullkickers’ comic, but the recap does a great job of getting me up to speed, but what really stood out to me, and would carry through the rest of the issue, was the tone of it all. The recapper states everything in such a matter-of-factly way that you don’t question how insane some of what he is saying sounds. And this carries throughout the entire book, it’s very nice to find a book I can actually laugh with.

Speaking of laughter, this comic has one of the best running gags I’ve seen in… well anything, truth be told. It’s so simple, and has a ton of potential to fall flat, but it just works. I think because it isn’t written into the comic, just kind of exists. I won’t ruin what it is, but the comic does tell you it will do it. 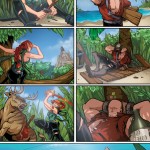 Then there are our main characters, a warrior elf named Kusia, and an alien-hunted brute named Rex. They are interesting to watch interact with each other and the situation around them. One springs into action to gather supplies, while the other chugs a bottle of rum since it’s better than salt water. I found their characterization to be fun, and their dynamic to be entertaining.

Their relationship is interesting. It clearly isn’t sexual in nature or romantic in any regards, but I wouldn’t call them best friends. The way they interact and bicker reminds me more of siblings. This underspoken fondness of each other, but some of their behaviors drive you up the wall. It’s a very refreshing dynamic between leads and makes for some fun exchanges.

Then there’s the art. Sometimes with comics, you’re so focused with the colors and lines that you miss the visual puns and words.. or at least I know I do. I really recommend taking in every panel in this comic. From the colors to the foreground to the characters,there’s a lot to appreciate. And already mentioned my fondness for the comic’s running gag, which is a visually evolving joke as well. It’s a great caper to any page.

Recommendation: Buy It– This is an easy one. Uncanny Skullkicker 1 will do well to remind many why we love the medium so much. It’s fun, it’s colorful, it’s action-packed and it’s worth a read!