Hello Comic Fans! Just a note that the next couple of weeks Top Shelf will only contain Frank & Josh.Â 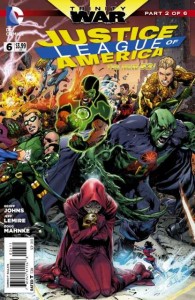 I will get the only problem out of the way first. The art lacked a bit in this issue did not seem as polished as the art in Justice League. It wasn’t horrible, just distracting when reading titles back to back. Otherwise this issue seemed to hit on all the right notes. I was really impressed with where the story is going as well as the excellent dialogue.

This issue left off right after the events in Justice League, and seeing the pain Superman was feeling was spot on for his character thus far in the new 52. I am not the biggest fan of the Superman/Wonder Woman romance but really seeing her care for him and looking into finding what the truth is behind what happened was perfect. I also really like the fact that Bruce was there by his friend the whole time trying to help his mood and encourage him that it will be okay. That dialogue was perfect in every way.

Overall, Justice League of America #6 was what I was hoping the Trinity War would be like! It felt natural and had emotion built into it. I absolutely loved how natural it was to bring it the Justice League Dark. This is going to be a fun story and one that I can’t wait to keep reading! 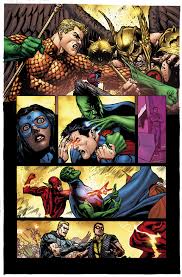 While last week’s top shelf pick was easy for me, this week’s much more difficult. I had fun reading everything this week, even despite my minor issues with a few of the books. In particular, outside of Green Lantern, I’m not a big fan of Doug Mahnke’s art. There are quite a few people who do –Geoff Johns being one– but there is a flatness to it that doesn’t resonate with me. Still, the mysteries of Trinity War are compelling enough that they helped make Justice League of America #6 a highly enjoyable book. For that, it is my top pick of the week.

Pandora and her box remain at the center of everything in this story. Characters may still be dealing with Doctor Light’s death but that hasn’t stopped Pandora’s Box from resurfacing into the story. It’s unclear whether or not it actually had anything to do with Superman’s current condition, but both Wonder Woman and the Secret Society are searching for it. It strengthens my prediction that the Secret Society will be the ones to obtain the box and use it to seal away the superheroes. Also, my excitement at finding out what the Secret Society has been planning for 5 years continues to grow. So far, Johns hasn’t disappointed.