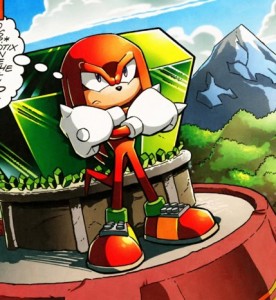 Welcome to Sonic Saturdays! This is the part of the site where where we geek out about the Sonic The Hedgehog Franchise.

For today’s article, I’m going to finish up the Spotlight on everyone’s favorite spiny ant-eater, Knuckles The Echidna!

In part 2 I left off with Chaos Knuckles. As Chaos Knuckles, he basically became a God. Maddened by Pain and Looking for his lost friends while trying to get a handle on his now increased powers, Knuckles tried to change fate.

He began trying time travel. His first destination was to the time before his ancestors Dimitri and Edmund created the Floating Island under the threat of a comet. He tried to stop the comet and only made things worse. Then he tried to stop the death of Â Edmund wich resulted in a future where everyone was roboticised. Â He could not change a thing. Everything he did just happened to make things worse. So he returned to the present before the changes could be made permanent. YUP, Convoluted! 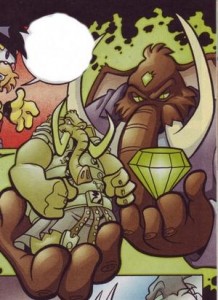 Then, theÂ villainÂ Mammoth Mogul decided he wanted to syphon Knuckles’ Chaos Energy for his own use. He kidnapped an ailing Dimitri and demanded Knuckles come and fight him. Knuckles obliged and the fought. Mammoth had pushed Knuckles to his limit, and in a desperate move, Knuckles expended all of his energy in a giant explosion killing the emerald Echidna. 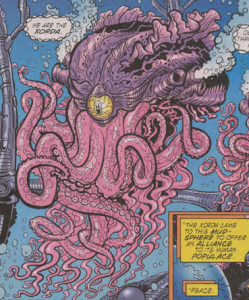 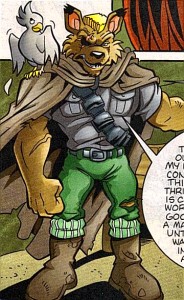 We get to see a littleÂ glimpseÂ of Echidna heaven, But Knux’s work is not done, so after a while he isÂ resurrected and de-powered.Â Â He returns to help Sonic and everyone fight an alien threat known as Xorda. It seemed that Sonic hadÂ committedÂ theÂ ultimateÂ sacrifice by delivering the finishing blow while getting zapped to the other side of the galaxy. During Sonic’s Year in space, Knuckles took up his cause.

This is when The Dingoes, A new militant threat came into play. Â I’ll Save you from all the details on them, but they were basically Nazis. Later, The Dingoes aligned themselves with Dr, Eggman (Robotnik} and have been a pain in Rad Red’s side, along with the Dark Egg Legion that I talked about in Part 2. 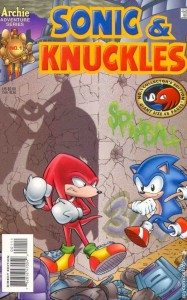 And that pretty much brings us up to speed on Knuckles. If you want the full story IÂ recommend picking up the Knuckles Archives from your local comic shop, or online from Archie’s Sonic Store here:Â http://archiecomics.stores.yahoo.net/sonic.html