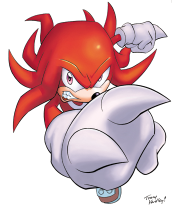 Welcome to Sonic Saturdays! This is the part of the site SpotlightingÂ everything about the Sonic The Hedgehog franchise. Today we are going to discuss the Archie comics version of Everyone’s favorite Spiny Ant-Eater, Knuckles!

Knuckles’ first appearance was a Sonic 3 tie-in during Sonic the Hedgehog #13. 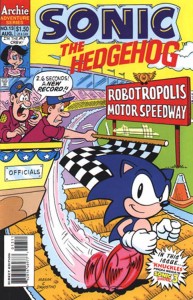 Â Much like his Sega counterpart. Knuckles is tricked by Dr. Robotnik into thinking that Sonic and Tails are a danger to his island, and are after The Master Emerald. Without that emerald Knuckles’ Floating island will crash into the earth. Knuckles reveals himself as the Last Echidna and Guardian of the island. Â After a little bit of fighting Robotnik reveals himself to be the one trying to steal the emerald. Seeing this Knuckles teams up with Sonic and Tails to defeat him. Knuckles and Sonic Clashed many times over the series. A fan Favorite battle was during the “Mecha Madness” event where a robotisized Sonic was met with a Robotisized Knuckles. Knuckles had a device on that allowed him to keep his free-will however. 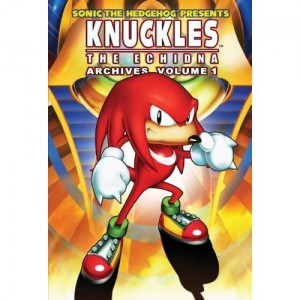 Later due to his popularity he had a regular back up feature in Sonic The Hedgehog, and eventually his own Series! Â His series wasÂ primarilyÂ drawn and written by Ken Penders. Penders introduced us to a rich, yet convoluted history of The Brotherhood of Echidnas, Â the Floating island, and their Rivals. 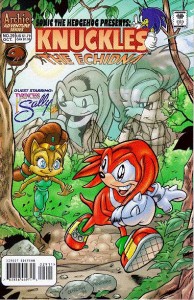 Knuckles was raised by his father Locke, and trained to be the next Guardian of The Master Emerald/ Floating Island from the age of five. Even before his birth however, Locke had a vision that his unborn son was destined to stop a great tragedy. As a result He beganÂ experimenting with himself, and Knuckles as he sat, yet unborn, in his egg. All for the purpose of making the Ultimate Guardian. It seemed to have worked as not long after he was born he was learningÂ academicallyÂ at a college level.Â During this time, Knuckles met Princess Sally Acorn, who became his first friend, though their time together was brief. 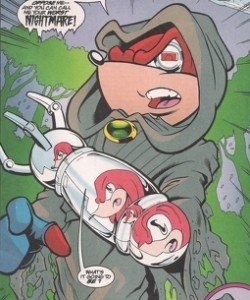 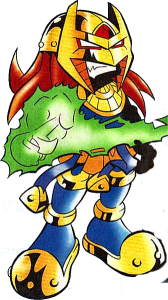 Most of Knuckles’ stories were stories of his peoples’ past. In peticular, his Ancestors Dimitri and Edmund. These two wanted to return the Floating Island, now called Angel Island, back to theÂ Continent of Downunda where it had originated. The plan was to gradually siphonÂ the Chaos Energy that kept the island afloat. However, the Echidna Council rejected this because they felt it was too dangerous a move. There was an accident with the device They were using thatÂ imbued Demitri with the power of twelve Chaos Emeralds and he took the name Enerjak. The power drove him mad, but with the help of the fire ants, Edmund was able to defeat andÂ imprisonÂ  him. Â After all this, a Technology Ban was put in place by the council. Not everyone was down with this however, so the followers of Dimitri became the Dark Legion which was lead by the Evil Kragnok. 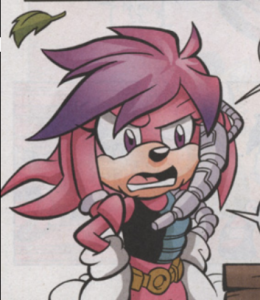 Archie felt that the Mini-series was successful, so they made an on-going. It was during these early issues that Knuckles finds Julie-Su. Â I could do a whole blog post on her, but for now I’ll just say she was a Dark Legionair who has a change of heart. At First meeting her and Knux clash, but quickly find they have similar personalities. 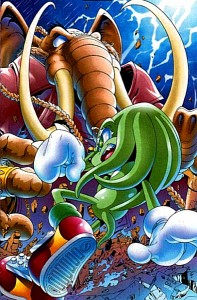 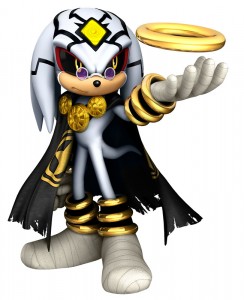 During the Sonic Adventure Tie-in Eggman had awoken CHAOS which shattered The Master Emerald. Doing so Also Unlocked Mammoth Mogul from his prison within the emerald. A hidden power within Knuckles beganÂ manifesting, most likely due to the experiments his Father did on him. Eventually he turned green and was deemed a living Chaos Emerald.

Knuckles began undergoing the extraction of his Chaos powers through the use of a device crafted by Dr.Â FinitevusÂ . Charmy Bee accidentallyÂ upset the process and caused a chain reaction. As a result, Knuckles became even more powerful than he had been, unaware that the incident had also transformed Finitevus into a madman who would play a terrible role in his future. 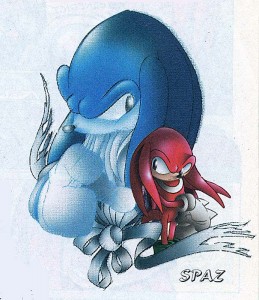 I’m Sorry guys, but I’m going to have to Continue on Knuckles next week. SO, TO BE CONCLUDED!!