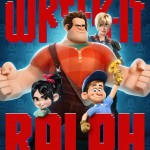 Wreck-It Ralph will go down as the first great video game movie. I wanted to start off on this note because for several decades now, gamers have had to deal with a less than stellar track-record when it came to video game films. We’ve watched as popular franchises like Super Mario and Resident Evil made it to the big screen in less than stellar franchise. We watched as even smaller franchise like House of the Dead and Bloodrayne were given to Uwe Boll and he turned out his usual tripe. We have even watched as Hollywood threw money and star power in hopes of attracting an audience, but that tooÂ hasn’tÂ worked. Finally from the folks at Disney though, we may have the film that all gamers and Hollywood could be proud of.

Let’s backtrack a bit though and start at the beginning. Wreck-It Ralph, like all great Disney films, is a movie about finding your place in the world. Ralph, the central character of the film, is the villain of a fictional video game, Fix-It Felix. For over 30 years, Ralph has played the villain in the game without getting any respect. Actually, he spends his night sleeping in leftover rubble from his destruction and gets tossed off the top of a building into the mud by his peers. ItÂ isn’tÂ a pleasant life to live. 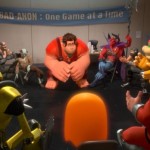 Ralph however continues to do his job with the diligence that is expected of him, but 30 years is a long time, and it has slowly chipped away at Ralph’s demeanor. On the 30th anniversary of Fix-It Felix, Ralph decides to attend a Bad-Anon meeting. Bad-Anon, if the nameÂ doesn’tÂ make it clear, is a place where villains from various games meet up to talk amongst themselves. If you have seen anything related to this movie, this scene has perhaps been spoiled for you on several occasions by now. This is where we get to see the likes of Bowser (from Super Mario fame), Zangief and M. Bison (of Street Fighter fame) and Dr. Robotnik (of Sonic the Hedgehog fame) hang out and geek out just a little inside.

Aside from the numerous cameos though, this scene is important in establishing the roles of the villains in this universe. TheyÂ aren’tÂ bad or even evil people, but they need to do what they do to stay relevant. They make mention of “Going Turbo” and how that killed a brand, and while they don’t go into it, it does become important to the plot of the film. Ralph seems to be in slightly better spirits after attending the meeting though.

However on his return to “Fix-It Felix”, Ralph sees the denizens of the game celebrating its 30th anniversary. He decides to crash the party since he is a vital part of the game as well. They react rather negatively to his appearance, and random destruction. Finally, one of them tells off Ralph, but not before giving him an impossible quest to be accepted. With this challenge in mind, Wreck-It Ralph is off on his journey of growth and discovery.

I won’t break down the plot much further because I don’t want to potentially ruin the experience for anyone else, but it is safe to say that the film doesn’t break any new ground in story progression. You are introduced to a cast of veryÂ likableÂ characters, who serve their roles well. You get the tough-as-nails with a very tragic back-story Army vet, you get theÂ naiveÂ but mean well do-gooder and you get the tough on the outside, sweet on the inside little girl. They are all very fun to watch on the screen and see where their journey takes them along with Ralph.

The animation, as to be expected from Disney, is top-notch. What really makes it stand out, especially for a gamer, are the little touches in the animation. Such as the fact that everyone in Fix-It Felix moves like 8-bit characters, which means they have limited movement of their body. This is done especially well during a dance sequence with Felix. 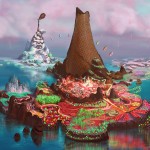 The settings are also great, and for the most part fully developed. While the film’s advertisement has focused on Ralph and his game, the majority of the movie actually takes place in Sugar Rush, a kart-racing game, which opens itself to all manners of candy-related jokes and gags. It is also a visually pleasing environment that has some truly stunning set pieces.

Wreck-It Ralph is a rock-solid film that I would recommend anyone to check out. It has something for everyone from kids, to gamers, to candy lovers and animation buffs.

For something slightly different to round out the review though, I wanted to express why I think Wreck-It Ralph works as a video game film without actually being based on an existing video game.

I’m sure I’m not the first nor I will be the last to make the comparison between Wreck-It Ralph and Toy Story. Both come from Disney. Both are CG. And both take elements of a person’s childhood and bring them into a modern setting and make them “real.” In the case of Toy Story, it was older toys like Mr. Potato Head, green Army Men, Slinky and Etch-A-Sketch. In the case of Wreck-It Ralph, it’s Pac-man, Q-Bert, Street Fighter and others. 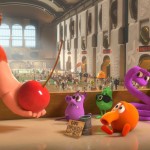 Both franchises are wise enough to understand that their strength and appeal has to come from more than relying on people’s nostalgia. The inclusion of real life figures/gaming icons is only an entry-point for the audience. It helps to establish the world. Once that it settled though, it is important for the films to establish their own universe with their own characters. Much like how Toy Story is a story about Woody and Buzz Lightyear, Wreck-It Ralph is a story not about gaming characters of past, but Ralph, Felix, St. Tamora Jean Calhoun and Vanellope von Schweetz.

They become the heart and the soul of the movie, but that doesn’t mean that you instantly drop the cameos and the references. You find clever ways to work them into the product. While most of the gaming cameos have already been shown, and do come within the first 20 minutes of the film, there are still plenty more visual touches that are a great wink-wink to the right audience. And the movie never breaks its own rules, or attempts to break the rules of the gaming world.

The movie also does a great job of providing commentary on the gaming industry without even glorifying the past or condemning the present. For example, during his game-jumping phase, Ralph enters a game called Hero’s Duty. An obvious knock on the industry’s current love-affair with the FPS genre. You even fight a generic race of alien bugs. While he is here, Ralph laments… or screams “When did video games get so violent?!” at the player. That’s it, the movie doesn’t attempt to show Fix-It Felix as the way games ought to be nor does it say that Hero’s Duty is evil as a matter of fact one of the characters from the game becomes a central character in the story. There are other little nods to things from gaming like “glitches” and crossovers, but again the film never takes a firm stance on any side of the line because it wants to appeal to everyone.

Ultimately, Wreck-It Ralph works as a video game movie because it knows it is a film first and foremost. It pays a great deal of respect to the source industry, but knows what it needs to do to be a rock solid movie. Perhaps, we have finally cracked the code on what it takes to make an excellent video game film.