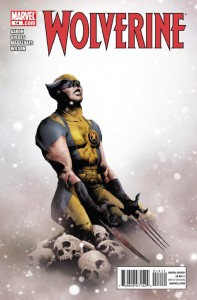 Â Â  Wolverine #14 is the conclusion to “Wolverine’s Revenge!” and sees Logan learn the truth behind the Red Right Hand’s revenge plan against him.

Now, I have one big complaint with this issue: until the end, it plays out just like the last few! The rest of “Wolverine’s Revenge!” has been Wolverine dealing with an enemy while it flashes to someone watching, and sets up why that person wants to hurt Logan. This was cool at first, but quickly dragged on. Sure, we got to know motivations and see Logan’s past, but really it wasn’t that fun to read, and most of this issue is like that, so that’s my biggest knock.

Jason Aaron has shown he knows how to write Logan again and again, but these last few issues have really shown he’s an excellent writer over all. While the motivations part does drag on (especially after seeing it done for the past few issues), he really does make you feel for the so called villains, and you can understand why they want Wolverine to suffer. For a book that’s so often used as just a straight up action title, Jason Aaron is able to get away with adding a lot of emotion. Props to him, although I wish he did it in a way that sped things up a bit.

Renato Guedes’ art is very solid. He makes the violence seem that much more graphic and gritty and shows you that Wolverine really is the best at what he does, and that what he does isn’t very nice. Some cool things are done with the colours during the flashbacks that give it this cool vibe that makes them feel like memories. One thing I’ll compliment him on as well is that during the twist ending (more on that in a minute) Logan barely says anything, but his thoughts are conveyed well through the art.

Speaking of that ending, oh boy is it a twist. I’m not going to give it away, but boy is it surprising and one hell of a gut-wrenching shock. While it is cool, it does lead to another negative: if you haven’t been reading for at least this story-arc, you won’t get the payoff and will probably wonder what all the fuss was about.

New Reader Accessibility Rating: 2. This wraps up the running plot of the series (or seems like it anyways), although you won’t be completely disoriented. The other thing that knocks it is you won’t get the payoff unless you’ve been reading since (at the very least) the start of “Wolverine’s Revenge”.

Recommendation:Â Borrow It, that way you’ll be able to get the whole story and all the payoff.