Lara Croft has gone through hell and back. 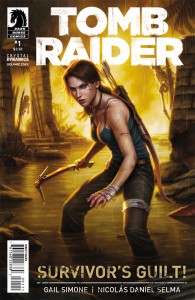 Perhaps that is a bit of an understatement, but after being trapped on the island of Yamatai for a bit and watching as friends got murdered and Lara herself getting beaten, bruised, tossed and nearly raped, it wasn’t a vacation. Through all of that though, she survived. Her and a few others.

Understandably, this ordeal is giving Lara and all other survivors nightmares and survivors’ guilt, and that’s where this issue begins. Lara is once again having nightmares of her voyage on Yamatai. As she once again feels the warm embrace of bullets whizzing by her head and being chased through the jungle while making leaps of faith. This time she is rescued by familiar faces, but things seem just a bit off.

It turns out that this was all a nightmare… or was it. As the issue unfolds, we are led to believe that this “dream” may have been foreshadowing the conflict that Lara and the remaining survivors will have to face, but stay tuned for that folks!

That’s on Lara’s idea. We also see how the island (haha this sounds like LOST) has affected some of the other survivors. With Sam and Lara living together, while Lara has embraced what the island has done to them and will try to move on, it seems like Sam is trying to bury the events deep down. Then we catch up with Jonah, his experience on the island has consumed his life. He is living far away from society. Has all of his belonging bagged up and concerned with the “Four Guardians” He wants to help himself and his friends by putting an end to their struggle.

It’s an interesting look at the various ways an ordeal such as Yamatai can impact a person’s life. Gail Simone does a terrific job of navigating those emotional and mental issues without hitting you over the head with this is why they are this way.

The counter to focusing on the characters’ emotional well-being, or not, is that this issue is very light on action. Which I found surprising for two reasons. First off, it’s a number one and that’s usually a good place to put action setpieces to get people on-board with the comic. Second, it’s based off of a video game, which in itself is really driven by the setpieces. It’s weird not to try to bring those over as much, but I guess wanted to establish the world before putting our heroine in danger.

In terms of coming from the video game, I was also surprised by how lively the comic looked. The game wasn’t as dark and brown as a lot of games, but it did have a more muted design to it. The comic, at least for the first issue, seems a lot more lively using a more balanced color scheme. It could help that they aren’t stuck in a jungle, but even the opening pages that are set there seem to be more vibrant. It was actually the opening scene in the jungle that focused my attention there. I like it, and it works.

In addition to the colors, the character designs in this book are really solid. Giving attention and focus to the areas that need it. Such as Sam’s “sleep-walking” scar or Jonah’s rundown apartment. It also does a great job with faces. Though, if had one complaint, and this is something I’ve never thought of, it really doesn’t do wet hair well. it’s something never noticed, but the fact Lara’s hair looks the same pre and post being soaked doesn’t change and that’s some amazing gel if that’s the case. It’s a minor nitpick and completely useless but there you go.

Review 5 (Out of 7): You need to be a little familiar with the events of the game to get some of the emotional impact of this issue, and it is light on action, but a really great start to this series.Â