The Power Rangers are back, and this time they are Super.

Following inline with the Samurai>Super Samurai transition, Saban has extended Power Rangers Megaforce into a second season, Super Megaforce. If you are an old-school fan of the Power Rangers, this transition kind of feels like the change that happened in-between the original Rita Repulsa season and Lord Zedd showing up. The show gets a soft reboot while still maintaining all the major players and locations. 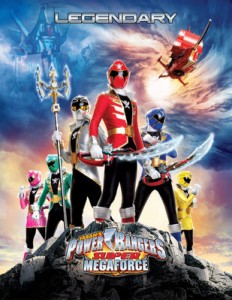 I feel like this switch is handled much more smoothly, by simply brushing over most of the change, but actually came away disappointed that they didn’t acknowledge the changes more. For instance the black Ranger turns into the green Ranger, and when asked about it “There’s a very simple explanation… oh emergency!” and it is never bought up again.

Then there are the new costumes, which works. I mean they morph, and get into them. No biggie, but no one calls out the fact that they are wearing pirates’ uniform? I mean does no one on the team notice the skull and crossbones on their uniform and helmet? The cutlass that they carry? None of them rings a bell? I can go with it, but where it loses me and makes me sad is when they get the “Sky Ship” which is a frigging flying Pirates’ Ship!

Yes, I’m not mad at the show for building continuity, but just upset that they threw away a perfectly fun season to continue it with. I mean we’ve done animals, dinosaurs, rescue vehicles, vehicle vehicles, and the likes, but we’ve never had a pirates themed Power Rangers and that could have been so fun. And it just makes me sad!

Aside from missing a golden opportunity with the pirates’ theme, I do love the big hook of this season, which is why I returned to the show. The team is able to call forth the power of previous Ranger generations, and it’s just really cool to see previous costumes and powers back in action. I was slightly disappointed that they don’t also get the ability to control older Megazords, but maybe that’s something that comes along later.

As for the episode itself, like noted earlier this is a soft reboot of Megaforce, which means a basic understanding of that series, its characters and world would help with this episode, but it does a good job of establishing the new stakes and new villains so you won’t feel completely lost. And of course some of the lingering threads will be answered over the course of the season hopefully.

Review: It’s silly to score a TV show, but from what I gathered on the first episode, Super Megaforce will be a fun series for old-school Power Rangers fans to jump back in with. Being able to see the old costumes and powers in play is pretty novel, and ultimately we know it will end up in a generation spanning battle so a heck of a pay-off down the road!Â