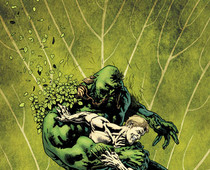 Scott Snyder will never cease to amazeÂ me. His writing is superb and is easily one of the best writers inÂ comics right now. In many comics, too much dialogue can beÂ frustrating, but Snyder uses it perfectly. With this second issue,Â Scott finishes up all of the explaining necessary and from here onÂ in, it seems like it’s going to be one awesome, horrifying ride.

I can’t put into words how much I loveÂ Canadian Yanick Pacquette’s artwork. Although he draws the faces ofÂ Alec Holland and other people pretty well, his strength is when he’sÂ drawing the frightening scenes. No one can draw a betterÂ axe-swinging, backwards head woman. I promise you that. And that oneÂ double spread page half way through the book, when the old SwampÂ Thing warns Dr. Holland of what’s coming…chills. So much detail,Â and so creepy. It will make you cringe.

I will be the first to admit, I haveÂ never read or even known anything about Swamp Thing. I’ve heard AlanÂ Moore’s interpretation of the character was classic, but other thanÂ that, I really know nothing. So when a Swamp Thing comic wasÂ introduced into the New 52, I had no interest at all. Then I heardÂ Scott Snyder was writing it, and I thought I would give it a try. DoÂ yourself a favour and do the same. It’s so much more than yourÂ typical superhero comic. There’s a very dark story being createdÂ here, and you should jump on while it’s only at issue #2.

Are you an Animal Man fan? If you’reÂ reading Animal Man and loving it, you NEED to get Swamp Thing asÂ well. Both are equal in the creepy factor, and both scared the s**tÂ out of me! Also, there is a crossover coming between both of theseÂ series and it is finally starting to be hinted at in this issue.Â Mention of “the red” and “the green” are constant throughoutÂ the book, and it’s only a matter of time before the storylinesÂ intersect.

Enough of me rambling. Go out and seeÂ for yourself. You will love it.

New Reader Accessibility: 4 — This isÂ only the 2nd issue of the series, and this is where mostÂ of the story is explained. You really don’t need #1 to know what isÂ going on.

Recommendation: Buy it — If you are going to pass on this comic,Â do so at your own risk. This is going to be one of the better storiesÂ of all the new 52.