Review Shooter: Mark of the Ninja

Klei Entertainment made their first big splash in 2010 with Shank. Everyone, including me, was immediately impressed with the art style and the fluid animations the game had to offer. Sadly, the game itself did not impress as much and neither did it’s sequel. Now they are back with the kind of generically named “Mark of the Ninja”. Can they deliver this time around? 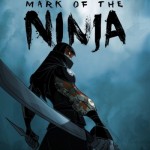 In “Mark of the Ninja” you play as a member of a clan which has just been attacked by some military organization, and you are chosen to exact revenge upon them. For that purpose, you get a tattoo with some special ink that gives its wearer special powers. The story is not all that interesting but at least the game keeps the gorgeous cartoon art style, so at least you will always enjoy looking at the cutscenes.

The game itself is a 2D stealth game, a concept that still seems fresh and works really well. For the duration of the campaign, which is about 6-8 hours long, you are sneaking past guards, shooting out lights with you darts, setting up traps and performing superbly animated stealth kills. You can tell that Klei put a lot of effort into making this style of gameplay work on a 2D plane. The most obvious one is the mechanic to hide in the shadows. Everything that is illuminated is in color while everything shadow related is in black and has white outlines. Well except for your character’s fancy red tattoos. This way you can always easily tell if you or your dead enemies are well hidden. 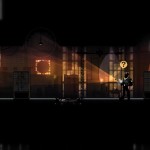 Â Another thing that can often frustrate in stealth games is sound. It never seems quite clear what makes how much sound and so you often end up detected no matter how hard you try. Here every sound made emits a sound bubble, so you can always tell who is going to hear what. This is especially helpful once you start using your powers given by your tattoo more.

The power given to you by the “Mark” is the ability to move faster than an average human being. In gameplay terms, it means that at any time you can pull the left trigger, time stops and you can queue up a couple of actions your character will perform as soon as you let go of the trigger. So a “simple” example might be that I jump off a rooftop and slow down time mid-air. Now I queue up a dart that will shoot out a light. Because of the sound bubble I can see that the guard not far away from it will hear it, so my next action is to throw a spike trap. WhiIe I am still mid-air let’s use the grappling hook to get to safe vantage point as well. Now when I let go of the trigger I kill the light, throw the trap and get out of the way in a second. The guard has never seen me, but as he goes to check out the light he gets killed by my spike trap. This ability together with the great level design allows you to set up really elaborate traps for your enemies with ease and encourages to try out different things.

Speaking of trying things out, the game is also great at allowing players to completely choose how to play the game. Want to play through the game without killing anyone? You can do that. Want to kill everyone? Works as well. Want to do a mixture of the two? Even that is totally possible. This is made possible by the very clever point system they implemented into the game. You get points for performing a stealth kill, but you also get point for distracting enemies, sneaking by them or inducing fear in them by dropping a dead buddy right next to them. This 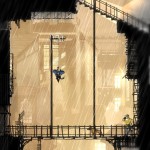 way you can earn a lot of points by killing everyone or just sneaking by them and earning a big fat bonus for not killing anyone.

You might ask yourself why you need these points. Well the answer it easy, depending on the amount of points you got at the end of a level you get up to three seals which also grant you points to upgrade your abilities. You can even get bonus upgrade points by finding hidden scrolls in the levels (some of them are in fun puzzle rooms) or performing special tasks. These can be earned based on completing specific tasks in certain parts of a level, not shooting out any lights, or hiding a couple of guys in dumpsters for example. With these upgrade points you can unlock new abilities such as stealth kills through doors, but you can also unlock new equipment. You can earn darts that induce panic in your enemies so they might fall down a ledge or kill their fellow soldier by accident. There are bugs that can eat a corpse silently if you need to get rid of one quickly. And there even is a cardboard box which you can hide under and perform stealth kills out of. If all of this is not enough variety for you there are even special suits to unlock which allow even further customization for your play style. One of them makes you completely silent, even while running, but you can only use distraction items and not any deadly traps. The guys at Klei even thought of including a “New Game Plus” option so you can play through a more difficult game but with all your hard earned abilities, which gives this title even more replay value.

Â King(Diamond Standard):If you were not already able to tell, I love this game. The only thing holding it back for me is the weak story. “Mark of the Ninja” is so well designed that it can accommodate basically any skill level and play style, a big feat for a stealth game. Makes one really wonder why this was not part of Summer of Arcade. Now while I continue my “New Game Plus” you should probably grab the game from the Marketplace.