Origins of the Undead: A Look at Zombies in Pop Culture

With the sixth season of The Walking Dead (2010) already making headlines on each and every gossip and entertainment website on the internet, it’s probably safe to say that the show has made a widely successful name for themselves. However, this popularity and success owes itself to even more ancient and traditionally rich, but unfortunately forgotten roots. Zombies have been around for decades, way before their first appearance on the big screen and were of completely different origins than the virus-spread disease we know today. 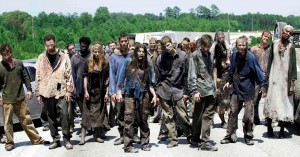 The concept of zombies originally originated in Haiti in the 17th century, and solidly embedded itself in the culture and folklore by the beginning of the 18th century after the end of French colonialism. According to Haitian folklore, zombies were the dead reanimated by sorcerers called “bokor”, and were used as slaves. The first instance that exposed the Western world to the idea of zombies came in the form of a book in 1929. The Magic Island, written by William Seabrook, told of voodoo cults’ resurrection practices in Haiti. This in turn inspired the film White Zombie (1932), in which American moviegoers received their first look at these undead creatures, and thus, the zombie film genre was born.

Throughout the following years, zombies have sporadically appeared in various films, such as Plan 9 from Outer Space (1959)and I Walked with a Zombie (1943). However, it was legendary director George A. Romero, AKA The Godfather of Zombies, who really thrust these corpses into pop culture with his 1968 classic Night of the Living Dead. Not only did Romero create the modern zombie we know today, he did so in a way that reflected and commented on the political and social turmoil of the time by casting a black actor as the main character and killing him off not by zombies, but by authority figures. Since this classic premiered, zombies have flourished and grown in all kinds of media, displaying new and unique interpretations along the way. 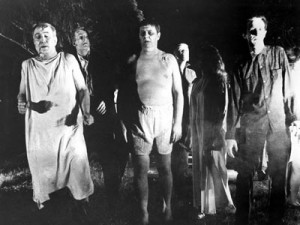 Before Danny Boyle’s fast running zombie in 28 Days Later (2002), zombies were traditionally slow moving and seemingly blank-minded. Although Boyle has explicitly stated that the infected in the film were not zombies, it is still considered as such by many other zombie and horror enthusiasts. Since then, there have been multiple portrayals of the fast-moving undead, including the Dawn of the Dead remake (2004), Zombieland (2009) and World War Z (2013).

Our favorite pop culture creature not only dominated the horror genre, but also made its way into comedy and romance as well. One early example of “zom coms” or “zomedies” include Return of the Living Dead, which was well known for its slapstick humor and the recent depictions of Shaun of the Dead (2004) and Zombieland (2009) were made to be comedic commentaries on social life. Warm Bodies (2013) took the modern zombie into a completely unexpected and seemingly implausible direction in romance, in which a zombie falls in love with a living breathing person. 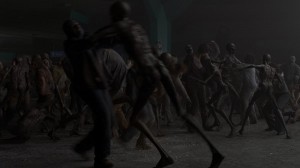 Perhaps it was Romero’s interpretation of zombies that ignited the multiple underlying commentaries and themes of the undead in the numerous films we have today. Nevertheless, zombies continue to act as a blank slate to tap into society’s fears and issues at a certain point in time. Romero’s Dawn of the Dead (1978), spoke to America’s consumerist population. 28 Days Later could be seen as a depiction of the fear of terrorism after the September 11th attacks. Even The Walking Dead could represent the themes of humanity, morals, and ethics in disaster situations.

No matter the current societal or political situation in the world, there will always be representations of it in pop culture in various vehicles. But the one medium that never seems to disappear continues to be the zombie. Nothing is more evident than the success of The Walking Dead as well as its companion series, Fear the Walking Dead (2015), both of which can be seen on AMC, DirecTV and Hulu. In fact, the iconic AMC original has inspired even more zombie-themed television shows, with classic post-apocalyptic zombies in Z Nation (2014) and zombie detectives in iZombie (2015). With the continuing proliferation of these creatures, it doesn’t look like they’ll be put to rest any time soon.