I like to think that Godzilla fans are divided into two camps: those who watch the films with a childlike sense of whimsy and healthy suspension of disbelief, and those who enjoy laughing at the campy storylines, poorly dubbed voices, and dated effects. 1973’s Godzilla vs. Megalon is a holy grail of sorts for the latter – a true relic of 70’s cheesiness full of wooden acting and awful light jazz music that only gets funnier with repeat viewings.

The film begins with a whiffed attempt to once again decry humanity’s continued testing of nuclear weapons by showing its effects on the residents of Monster Island. Judging by Godzilla’s reaction, the nuclear testing either greatly incenses him or turns him into a badass dancing machine. You decide. Â Either way, Godzilla and friends aren’t the only ones perturbed by the careless nuclear testing. A clandestine underground civilization called Seatopia is fed up with bombs going off over their heads, and they decide to send their guardian beetle monster, Megalon, to the Earth’s surface to teach humans a lesson.

The Seatopians are an unusual race of cave-dwelling humanoids, to say the least. Their king, a middle-aged man with nothing but a toga and copious shoulder hair to keep him warm, demands for his subjects (who appear to be wearing giant condoms) to constantly praise Megalon through ritualistic dancing. We are informed that Seatopia is a highly advanced civilization but is lacking in resources, and so the king sends two of his “finest” spies to Japan to retrieve some advanced human technology. 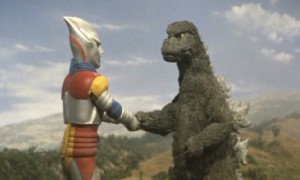 The Seatopian spies target a Japanese inventor named Goro, who lives with his friend Hiroshi and a young boy named Rokuro. The relationship between Goro and his companions is never really explained, and a good amount of humor is derived from their awkward interactions with one another. Goro’s prized invention is a human-sized robot named Jet Jaguar, who the Seatopians want to use as a Silver Surfer to Megalon’s Galactus.

Resembling Ultraman if he were dressed as a clown at a children’s birthday party, Jet Jaguar is an abomination of character design. His toothy grin, flyswatter antennae, and playdough-like attire belie a sophisticated fighter who has the ability to “self-reprogram” to grow to the size of his colossal kaiju co-stars. Maybe I’m being too harsh on poor Jaggy — he was, after all, designed by a Japanese child who won a “make your own superhero” contest, though you’d think Toho would have chosen a design a little less derivative of their own television heroes.

After a series of downright embarrassing scuffles full of flailing limbs and awkward man-grunting, the Seatopian spies successfully steal Jet Jaguar from Goro and use him to lead Megalon — now on the Earth’s surface — to Tokyo, where he proceeds to destroy a dam. Goro and his pals manage to regain control of Jet Jaguar by using a backup control mechanism and send him to summon Godzilla for assistance. Understandably, the Seatopians don’t want their monster to be at a two-to-one disadvantage, so they summon the cosmic monster Gigan to even the odds. Cue the stock footage!Â 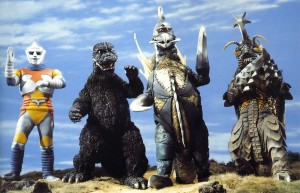 The stock footage in this film is surprisingly implemented much more competently than in the previous year’s Godzilla vs. Gigan, and the tag-team battle is far better-paced as a result. Jet Jaguar makes the first move and is quickly and humiliatingly defeated by the pair of sinister monsters. The pathetic metal dope even allows himself to be taken hostage by Gigan at one point, but Godzilla uses his radioactive breath to free him. The battle ends with Godzilla showing off his prowess by, um… jump kicking Megalon a couple of times..? I honestly don’t know how to describe Godzilla’s coup de grÃ¢ce, as he defies all laws of physics by floating toward his opponent from across a valley, feet-first.

If you couldn’t already tell by my enthusiasm, I like this goofy film very much. Objectively, it’s one of the worst of Godzilla’s outings, but it’s undeniably fun to watch. Jet Jaguar is a stupid character who doesn’t deserve to stand alongside the series’ monsters, but Megalon is a fairly unique kaiju, and it’s sad that he does not appear in any other Godzilla film. This film’s legacy might end up owing much to Mystery Science Theater 3000 for significant exposure in the early 90’s, but it stands on its own as a highly entertaining B-movie classic and one of the most memorable entries in the series.

Fun Fact: Godzilla and Gigan were not originally supposed to appear in this film – it would have focused on Jet Jaguar as he battled Megalon.