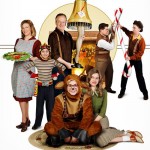 A Christmas Story 2 falls into the worst camp of them all, a sequel that exists solely to pry on the nostalgia of a crowd that grew up with the original. Getting slightly ahead of myself though, let’s go to the scoreboard!

For a film with Christmas in it’s very title, this movie had very little to do with Christmas. The two main plots don’t focus on Christmas at all, leaving it to be in the background, mentioned every now and then. The story following the kid is the standard “Kid breaks something, has to gather money to pay it off” while the other story is that the dad is cheap. That is it. You could have set this movie at any other time of the year and it would not have changed the two stories at all.

The reason that this is set at Christmas is because they managed to get the license to make an OFFICIAL sequel to A Christmas Story, one of the true Christmas classics. And this film decides that it has to shove this fact down our throats by having every other scene include a “borrowed” joke or set piece from the first film. To make sure we don’t forget that this is a sequel.

If you can’t tell I did not enjoy this film, but that’s not because it is bad, it is mediocre at its worst. It is just because it has the title of being the OFFICIAL sequel that we must hate and bury this film.

We watch a lot of crap for this feature. My general motto is “I’d prefer a bad movie over a bland movie” but after seeing A Christmas Story 2, I want to amend it to include shameless and soulless movies. I know it’s always odd to describe a film as soulless, but it’s the best way to describe this film. It exists, not to return people to a warm memory of their youth, nor does it look to modernize a classic. Instead, it wants to act as a parasite feeding on the good will that the original has built over the years and countless reruns on TBS.

How does it do this exactly? By constantly beating you over the head that it is a sequel to the OTHER movie you enjoy. Characters, gags, situations and jokes are repeated from the original movie with a wink wink, nudge nudge to the audience so that they get it. The characters seem to have exhibited no growth or change from the gap between films, and it’s rather insulting after the original.

Then there’s what Swan mentioned above, there’s really no element of Christmas on display here. Sure, it’s a story that’s leading up to Christmas day, but that plot is put on the extreme backburner. The original movie dealt with Ralphie’s quest for the ultimate Christmas gift, and this movie tries to replicate it with his first car except the car takes an extreme backseat throughout the film. It isn’t even discussed with his parents beyond a single scene, but he ends up getting it anyhow!

But that doesn’t even take the cake, it is the non-existent love story subplot that has no real.. arc to it. Ralphie likes a girl.. who dates the popular jock at school.. she sees him in an embarrassing costume.. they end up going out at the end of the film. That’s the arc. No words are exchanged between them before the final scene.. and.. ARGH!

Without a doubt this was one of our worst films for drinking, with only one and half beers being finished in the 90 minute run time. We went with our all encompassing Christmas rules, which in theory should work well with any Christmas movie. It is a shame that we were not watching a Christmas movie.

I wouldn’t recommend watching this movie in the first place, but if you have to our set of rules is not the place to look. But that is alright because I have decided on a single rule to use for this film, drink every time you wonder why this movie was made.

There’s really not much to say here. We used a set of rules that are designed around classic Christmas tropes as we mentioned in the movie section, this isn’t a Christmas-centric film. Thus, we really didn’t drink much. Some of the drinks were kind of forced just to drink.

It wasn’t the best set of rules, but that’s what happens with blanket rules at times. Live and learn.