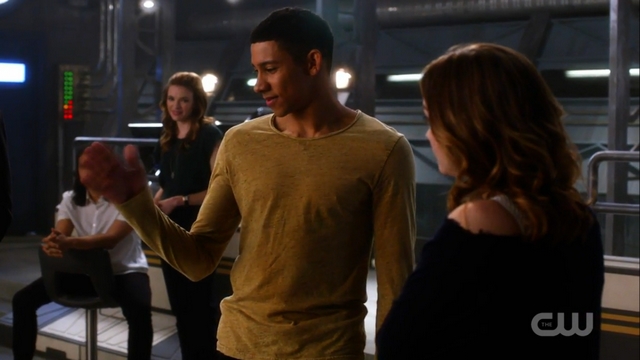 Insert witty speed related spoiler warning, It’s time to get up to speed(ha) with this week’s Flash. Our episode begins as Jessie Quick (Violett Beane) warns the team that Harry (Tom Cavanagh) is in danger. Remember Gorilla City name dropped in season 2? Earth -2 has a city of highly intelligent gorillas whom reside secluded. Any who they kidnap Harry, Wells from Earth -2.

Understandably Jessie is freaked out her father’s safety. B. A. (Grant Gustin) assures her that they will save him. Cisco (Carlos Valdez) and Caitlin (Danielle Panabaker) join for the adventure. In the midst of this Barry has Jessie and Wally (Keiynan Lonsdale) stay behind to protect Central City. At this time Ms. Quick learns a certain somebody has powers. The reaction however leaves a lot to be desired.  So Mr. Allen lets Julian (Tom Felton) know to cover for him at work. Mr Albert displays some very excited interest with the team’s next adventure.

He takes this a step further and joins them right before the trip. He’s seen his fair share of expeditions and knows how to use a gun! So the team arrives at Earth-2 again and begins their search. In the mean time Wally tries to get friendly with Jessie. Now, this is where our episode gets more interesting. The scenes with these two youngsters is visibly cringe worthy. As the audience we are left asking; why is she so distant? This is further proven as they run off to stop a heist. KF is soaking in the super heroism…while she isn’t amused. 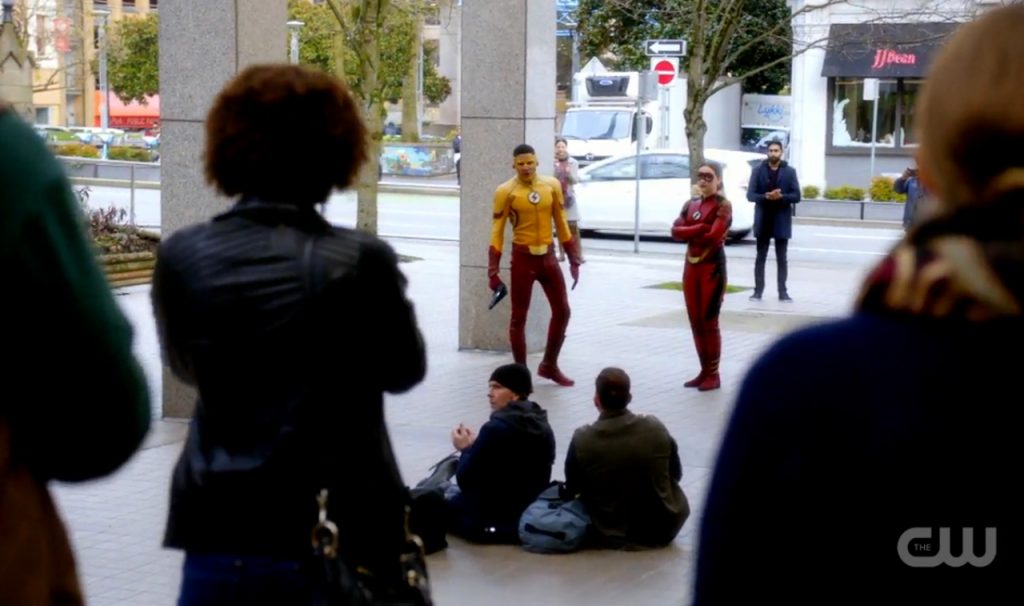 Back to Barry and co. the get further into the jungle searching for Harry. It’s all a trap when they get knocked out by tranquilizer darts. So how does the fastest man alive not see that coming? I have no idea. The team awakens to find themselves in some lovely jail cells. Unfortunately, the bars render Mr Allen’s and Ramon’s powers unusable. Grodd (David Sobolov) reveals via a mind-controlled Harry why he was captured.

Turns out he used Harry as a means to lure Team Flash to Gorilla City. All the gorillas are as intelligent as him and their leader has an agenda. The king, Solovar (Keith David) plans to rebel against the humans. He seeks burn the cities of Earth-1 to ash. Now, those are some serious aspirations. Grodd wants to stop him but he can’t do it alone. He admits that he’s too weak to complete that task. Let’s take a moment to think about that. A huge imposing figure like Grodd fears someone else. It’s humbling to see him to admit his shortcomings given his size and stature.

There’s a caveat however, they have to beat him at the coliseum. But they can’t resort to killing, the good guys don’t do that. Even though a certain somebody has managed to keep his hands clean while destiny does the dirty work. 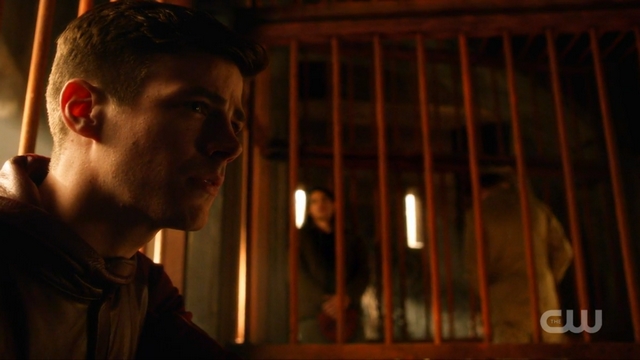 Going back to Wallace and his very odd relationship status. So the crazy kids meet up again. Now this scene is more painful than the last. Jessie felt odd mainly because he is a speedster now. She felt that his feelings for her were partly due to her superspeed — Crazy I know. I mean why would she think a guy whom used to drag race would like that? Wallace retorts in earnest as he asks her to stay with him on our Earth. I feel like their moving pretty fast(hah)! However she feels that she has no place in his seemingly grand journey.

Yes this conversation is not going as planned. She literally walks away as he’s visually is stunned and confused as are we. The shot zooms out as she moves on and Wally stands still. Relationships is something we just never have an easy answer for. There’s never any easy answers for relationships. Superheroes falling in love is a good idea right?

Back to the parallel Earth, the team is greet by the gorilla king Solovar. The imposing silverback demands answers from them. He sees their trespassing as a challenge to their safety. As Grodd tried to provide answers and Solovar strikes him. Clearly the king thinks very little of Grodd. It’s surprising to see our bad psychic ape physically put in his place by a superior. Solovar ignores Barry’s pleas of peace and demande a trip to the coliseum. For everyone’s safety he manages to parlay it into a one on one fight. 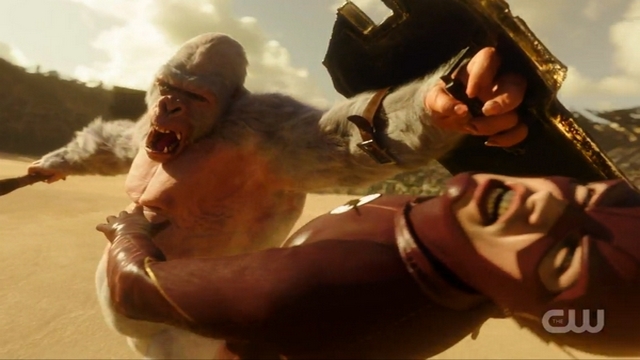 The scarlet speedster and the king square off in an impressive display of skills. I’ll fastforward and say that their fight is some of the best CGI this season by far. Despite his speed Barry gets a bit battered and bruised. The rumble in the jungle ends as he takes a page out of Reverse Flash’s book. Mr. Allen spares the gorilla and does his best to show they aren’t monsters. Soon afterwards, after walking up from another tranquilizer dart, things just get worse. So everything they were told before? All lies by Grodd. Solovar had no intention of invading Earth-1 whatsoever. In defeating the former king The Flash played into Grodd’s plan.

The gorillas made Grodd the new king and stand behind his vengeful agenda. I mean it’s not the first time the team has been fooled– there will be more chances for that! But it just goes to show you all their reoccuring enemies are no fools. Still Grodd in all his intelligence is just fueled by anger. His reasoning is that he’s just an animal was very weak in terms of the plot. In fact, it really did drag down the character. The character deserves more than to be  summed up so lazily.

So Team Flash has to escape and avoids a catastrophe. This all comes down to Cait using her powers to “kill” Barry. Clearly this is a bit scary but we all know she wants to stay away from Killer Frost. Despite he best efforts and good intentions she seems to go back to that side of her. Somethings we just can’t avoid. 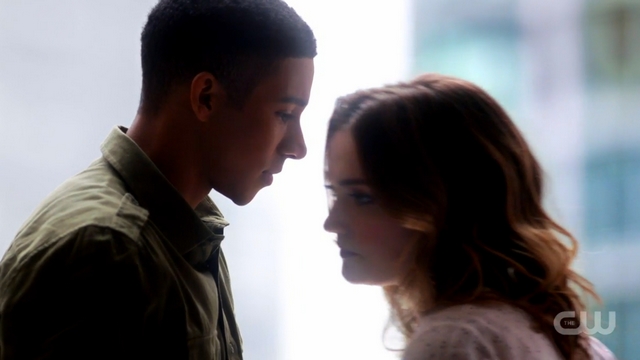 Back in Star Labs, Jessie is mulling over her relationship with Wally. HR being a people person urges her to run(hah) after love. He conveys although not seriously, if we don’t go after what we want we become something else. Life moves fast, especially for speedsters. So missing out on a great thing leaves you somewhat hollow. You have to risk it all.

Central City’s best scientists manage to trick the gorilla king that The Flash is dead. I wonder how many near death experiences Mr. Allen has had now? Any who they manage to barely escape back home.

As Hr is tended to, Jessie and Wally are officially together(finally!). Julian shares to Caitlin that he’s very fond of her. She does her best to scare him away though. How effective would that be to a guy that studies meta humans and likes danger? Again, I like say Mr. Albert has a death clock because of this.

Everything ends safe and sound…ok of course, The Flash never ends that way. We cutback to a massive gorilla army armed for combat. Grodd from his throne has Gypsy under mind control…yikes! 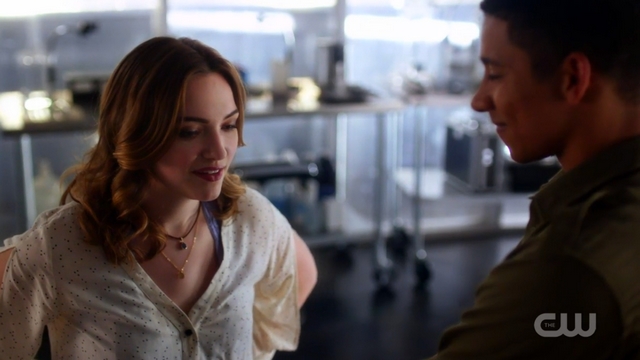 This episode was a mix of fun and just plain painful. Seeing the team as strangers in a different land was a nice change. The use of CGI in this episode has to be applauded. It wasn’t overused but rather it was used effectively and wisely.  May be its just me but seeing Barry get beat up by a giant gorilla was fun…again! One last note — The scenes between Jessie and Wally were deliciously painfully to watch.