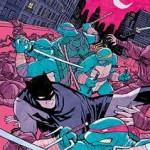 Cards on the table, there’s no way I wasn’t going to love this comic even if it sucked. Since I was about 5, a Batman/Ninja Turtles crossover always seemed like the most awesome thing. Sure, I got Batman and Superman crossovers, I got the Justice League, the Ninja Turtles even made an appearance on Power Rangers, but it was always Batman and the Ninja Turtles. So much so that an even older me created a fictional band for the group back in college.

Color my surprise and excitement when this book was announced over the summer. I’ve slowly been counting down the days, and I’m sure driving my friends nuts, with the impending release, and now the book is here…. and it’s a damn good thing it’s highly entertaining!

The first question you’re probably gonna ask is how does it work? Well, it seems like the Ninja Turtles were transported to Batman’s Earth, and are trying to find their way back home. But they didn’t come alone as Shredder and the Foot Clan are in tow. The issue actually begins with the Turtles thwarting the Foot’s attempt to rob a laboratory, but the ending of the confrontation seems a bit shaky for our favorite Heroes in a Half Shell.

During the opening few pages is also when we meet the star of the comic, the art in this book is absolutely fantastic. The color usage is just eye-candy to behold. The introduction to the four Turtles cloaked in shadows but popped against their respective colors is delicious. Then you turn the page, and you have the hulking Batman against the wonderful Gotham City backdrop. I don’t think the artist could have nailed their intros any better. 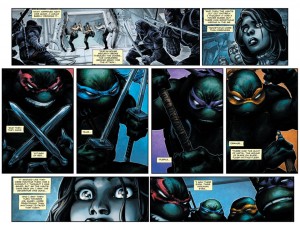 The art in the book kind of reminds me of the concept art for the Batman: Arkham-series of video games. It makes the characters seem larger than life, but instills it with so much color and personality that it doesn’t come off comical. Very nice balance.

If I had one problem, and more of a minor complaint than anything, I realize that all artists are allowed a bit of creative freedom when coming up with designs. But this is one of the… goofier looking Batmobiles I’ve seen. Like I’ve seen them with actual Bat-faces on the hood, but designing the hood as a bat seems different. I mean Batman is all into branding, but even this seems like a bridge too far for the guy!

Now back to the story, it’s actually a really solid introduction to the Ninja Turtles and Batman without being filled with text bubbles trying to fill you in on who these characters are. Let’s be fair, they are two of comic’s greatest exports probably not much explanation needed. Batman gets to do a bit of detective work as he closes in on the Turtles and the Foot. The Turtles get to show their love of pizza, Mikey’s at times adolescent behavior (they are teenagers!) and much more in these pages.

But I think the best trick that the comic pulled was giving both sides plenty of action without really spilling the big moments yet. We get a lot of teases of what’s to come (and one showdown in particular, I can not wait to happen), but this issue gave us enough to be satisfied but still want more. It’s always a tricky line for a first issue to walk.

Review 7 (Out of 7) – I said at the beginning there was no way I wasn’t going to love this book, but I’m more than thrilled to announce that it is also a damn good read with some beautiful art. If it wasn’t on your radar for some strange reason, I’d recommend picking it up today!