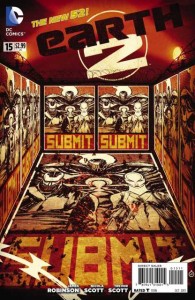 Two things we learn right away: Earth 2’s heroes are still very inexperienced and not invincible. After arriving in the country of Dherain to preempt Steppenwolf’s imminent attack on the world, Green Lantern, Flash and Doctor Fate encounter the World Army’s team of wonders. Soon after they are attacked by three of Steppenwolf’s generals. The good guys lose. Neither the strength of the World Army nor the power of the Wonders could prevent our heroes from being beaten into the ground by Steppenwolf’s team of “Terrors”. Meanwhile, Hawk Girl continues her investigation into Sam’s murder and Mr. Miracle and Barda fight for their lives.

James Robinson and Nicola Scott are the two main reasons I continue to read and enjoy this series. Robinson manages to juggle multiple characters and their respective stories while still telling an exciting and coherent narrative. Instead of opening the book with a battle, Robinson chose to show us the aftermath first. I found this to be a better method at pulling me into the story. Changing gears, Robinson takes us back to Hawk Girl as she arrives in Casablanca. We’re not seeing a whole lot of her story, but it only takes a couple pages for Robinson to keep you invested in her. The past few issues have seen her investigation into Sam’s murder grow deeper, bit by bit. Finally, Robinson returns us to the ruins of Gotham City where Barda and Mr. Miracle fight for their lives against Fury. In a magnificent surprise, Red Tornado interrupts their battle! With the wonders beaten, Hawk Girl captured and Mr. Miracle about to fight a new enemy, Robinson has set quite the stage for his final book before Tom Taylor takes over.

Equally impressive about this book was Nicola Scott’s art. In particular. The battle between the Wonders, World Army and the Terrors was beautifully done. Not only does Doctor Fate’s magic look spectacular, but the overall look and style of the powers in this book really set them apart from the main DC line. Scott is genuinely putting a lot of thought and effort into making them look less like energy beams and more like there are actual rules behind how they’re constructed. While the two page spreads in the book are impressive, the final page with Red Tornado is definitely my favorite in this book. It’s powerful, ominous and threatening. Combined with Robinson’s writing, her art makes me impatient for next month’s issue.

Thanks to the magical teamwork of Robinson and Scott, Earth 2 is one of the best books at DC. A lot of care and planning has gone into maintaining this series’ longevity. Naturally, the change in writers puts a lot of those plans into jeopardy. The series’ fate won’t be known until later this fall, but one thing is for sure: readers still have at least one phenomenal issue to look forward to.