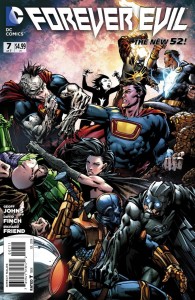 Villains succeed where heroes fail. Lex Luthor and his “Injustice League” conclude the terrible reign of the Crime Syndicate. Meanwhile Batman meets up with Cyborg and the two head off to rescue the rest of their super friends. After nine months of “Forever Evil”, Geoff Johns shatters the status quo of the DC Universe in spectacular ways.

Trinity War has finally, completely come to an end. It ended last summer, but its consequence was Forever Evil. With this book, the story that Geoff Johns set out to write since the start of the New 52 has finally come to a close. While long in its execution, as a whole it was simply amazing. The DC Universe has always been filled with stories about powerful heroes saving the day. Yet, with so many powerful beings in the world, how can they all possibly get along perfectly? They may all be “good guys” but it’s unrealistic to believe they wouldn’t bump heads once in a while. That’s what Trinity War was about. We saw these heroes get in each other’s way and it distracted them from the real threat that was right under their noses.

At the end of this book and in Justice League #30 we discover that the world blames the Justice League. They failed to protect the world from an outside threat. Not only that, but they weren’t around to clean up the mess. Instead, the villains had to step up and protect the planet. Where Trinity War chronicled the fall of the Justice League, Forever Evil heralds the rise of Lex Luthor. As the main character he carried this story well. Johns did a wonderful job gradually chipping away at the parts of the character that made him “evil”. By the end of this book, we’re presented with a character that is not 100% good, but significantly closer to it than ever before. I can actually say with certainty that I liked the character throughout this story. If you’re going to turn a villain into a hero, this is how you do it.

The artwork by Richard Friend and David Finch was interesting. It was gorgeous despite character faces looking down right creepy at times. Still, it may have bolstered the emotional impact of some of my favorite scenes. A particular scene at the beginning in the room with the “Murder Machine” cemented my adoration for Bizarro. The artwork and writing of this very scene couldn’t have been more perfectly executed. The final battle itself also looked phenomenal and was exciting to watch play out. It’s one thing to watch Superman, Batman and Wonder Woman because you know they hold back enough to avoid killing their opponents. Lex and his League do not have that problem. They’re not afraid to kill and do so without hesitation. Knowing this does not prepare you for these moments.

As a finale to a story that has taken almost a year to play out, I’m satisfied. There were a few unresolved threads but they felt more like teases of things to come than the casualties of a big story. Johns definitely accomplished everything he set out to do in this story. The Syndicate was defeated, Earth was saved and the Justice League rescued. Readers were treated to wonderful moments that will change the New 52 universe for years to come. One of the major changes happens at the end of this very book and it’s not the final page. Lex learns something that made me literally gasp the moment I read it. I have a feeling DC fans will be feeling like we’re walking on egg shells waiting to see what Lex does with this information.

With the heroes returned to the world, the DC universe can move on to recovering from the reign of evil. On the horizon is the Future’s End that has begun to play out in the new weekly series. It may not be entirely disconnected to what happened in Forever Evil. As the final page in this book teases, a threat much worse than Dark Seid is coming for Earth Prime. Future’s End may play a part in setting that story into motion. In the mean time, we’ll continue to enjoy the post-Evil world where Lex Luthor is a hero and a member of the Justice League. 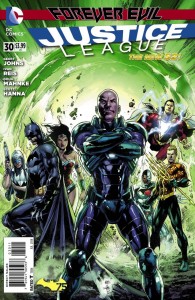 Lex Luthor saves the world. The Justice League don’t believe that Lex is a changed man and scour the planet for his whereabouts. They believe him to be up to his usual evil schemes. Instead, Lex is busy high above the planet constructing a new Watch Tower. Geoff Johns brilliantly executes a wonderful companion story to Forever Evil’s conclusion.

If you’re confused about whether or not to read Justice League #30 before Forever Evil #7 then know that you absolutely must read Forever Evil before this book. This story is part epilogue since it answers some of the questions left unanswered at the conclusion of Forever Evil. Lex did indeed save the world and the world now sees him as a hero. Faith in the Justice League is at an all-time low. People don’t feel completely confident in their ability to protect the planet. Lex, in his egotistical manner believes he can help. He builds a new Watch Tower, gives them command of it and even invites Shazam to be a part of the new team. Naturally, they don’t believe his altruism and it leads to a great moment in the book: Wonder Woman uses her lasso of truth on him. This is where we find out some surprising revelations about this new Lex Luthor. He just may be a changed man. I am open to the idea of a “good” Lex Luthor especially after how much I grew to like the character in Forever Evil. Still, it’s good to see characters like Superman remain unconvinced. As long time enemies, it’s not something he’s going to just accept. Johns did a wonderful job handling this. What was most surprising was how human it showed Superman. Even after Wonder Woman’s lasso revealed the unapologetic truth about Lex Luthor, Superman refused to accept it. His own bias against Lex was affecting his ability to see the truth for what it was.

There were certainly plenty of other great moments in this book. Flash and Cyborg had a few great jokes that helped eased the tension of the confrontation with Lex. Seeing more of Shazam was also great. I enjoyed seeing him in the Justice League: War animated feature and he was just as wonderful here. Ever since his backup story start I’ve grown to enjoy the character. Finally, while we don’t actually find out what Lex has decided to do with the information he learned at the end of Forever Evil, we are teased by its possibility at the end of this book. It’s a moment no Justice League fan will want to miss.

Justice League #30 is a book that can stand on its own as a jumping on point for new readers but to really enjoye and appreciate it, it should be read after reading *Forever Evil * #7. It’s almost like a #0 book because it feels like the start of a new era for the team. For the first time, the team roster will be shook up. This isn’t counting the pre-Trinity changes because those didn’t stick. Lex, Shazam and Captain Cold look like they’ll be staying for the foreseeable future. With such a shift in the status quo, Johns should have no trouble exciting readers.