Finally! Jessica Drew gets her own solo title spinning out of 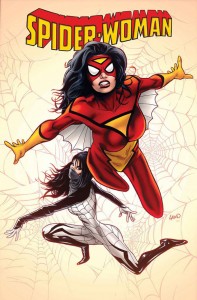 Let me start out by saying that if you’re not reading Spider-Verse, this would be a very confusing issue. That is one of the weakest things about this being a first issue as an event tie in. As a first issue, there isn’t much accessibility, if I were not reading Spider-Verse this issue would have been rather disappointing and honestly don’t think I would be back for issue 2. Now if you’re reading Spider-Verse you have an idea why this team of Spider-Man Noir, Silk, and Spider-Woman are traveling to alternate earths, as well as the scope of the event and what is ultimately at risk. The issue sees some great character interactions and a shakeup in the team tasked with protecting Silk.

Another gripe I had with this issue is that it really didn’t feel like Jessica’s book. This could be due to the large cast of supporting characters and the focus not entirely being on Spider-Woman. It honestly felt like Silk’s book, which is ironic because she is getting her own ongoing series relatively soon. Despite this, I will definitely be coming back for issue 2 because I can never have enough Jess in my life and I am enjoying the hell out of Spider-Verse. With so many Spider-Men and Women involved I can see why this is spilling over into so many other series.

The art, even though I’m not a fan of Greg Land’s, wasn’t THAT bad. There were some scenes where I was like, the human body does not look like that, and others where I had to make sure that he drew the whole thing. So I guess overall his artwork is getting better. Although I still do not like the way he draws children or teenagers, for example, Spider-Girl in the issue looks like a grown woman. My hope is just that he isn’t on this book for the long run. The writing on the other hand was great, Dennis Hopeless did a terrific job with these characters and maintaining the momentum that Spider-Verse has.

Rating: 4 (Out of 7) – Great if you’re keeping up with Spider-Verse and want to delve deeper into the story! If not, I’d skip it!