Comic Book Review: Under the Flesh #1 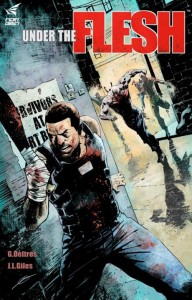 Every now and again we like to spotlight a up and coming comic series and this week we are focusing on Under the Flesh, a zombie book different for anything we have seen before, the virus only affects males. The story revolves around a soldier, Lt. Lobos,  who was injected with nanobytes right before an outbreak and made him immune to it.  These zombies are similar to normal zombies but they actually hide and stalk their “prey”. It took less than 24 hours for the virus to infect the world, life has forever been changed. How will Lobos, his girlfriend and a group of people survive in a world turned to hell?

With The Walking Dead, Dawn of the Dead, 28 Days Later and so many other zombie related programs, people may be getting sick of the undead. There are only so many variations of the same basic concept before the craze dies out. Under the Flesh on the surface seems to just be another zombie tale that we have heard over and over, but as you read the first issue there is more to this story then originally thought. The “twist” that this outbreak only affects men is a nice touch, thankfully our main character is immune to the infection and seeing him interact in a now women’s world is entertaining. That is not to say that he is the last man left, there are plenty of other men who have not come in contact with the virus. As expected zombies are not the only threat in this world, and how the group deals with other people is not totally revealed, but should make for exciting encounters. The art is truly what makes this comic shine, the detail and colors work well with the theme of the issue.

Overall, Under the Flesh #1 was a lot more entertaining than expected, it has the familiar zombie concepts but with plenty of fresh ideas that makes the reader want to read more. There is an instance connection to the main character even if he is a sort of super soldier. Under the Flesh is a fresh take on a genre that is way overused, and the artwork could go toe to toe against artists in the big two.

Let me know your thoughts below or on twitter @joshraj9

Tags: Under The Flesh