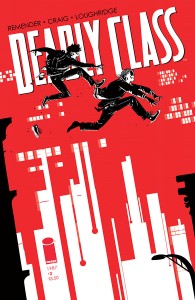 When I read the first few pages of Deadly Class #1, all I could think was “Whoa, this is some heavy stuff. Gritty, depressing, so real, I LIKE IT!” I wasn’t sure where it was going but damn if it wasn’t something different. And then it took a complete 180 from where I thought the story was going and I was still all like “Whoa this is some crazy shit I LIKE IT!” Well, here we are in the far flung future with issue #3 and I’m still pretty sure I like this book.

Deadly Class is the story of Marcus Lopez, a homeless teen with a mysterious past. His daily struggles on the street eventually reveal a person that deals with deeply painful emotions and truly hates his existence. Nothing matters, and even killing himself is too difficult to bear. However, the demons of his past eventually catch up to him, hunting him down in the very streets where he eats and sleeps. His unlikely rescue at the hands of Saya leads him into the arms of Master Lin at King’s Dominion High School for the Deadly Arts, and underground prep school for assassins. Here he will learn to survive all new challenges and face the enemies of his past.

Issue #3 is a bit of a character analysis, and a bit of an exposition on the state of personal relationships and how Marcus views them in his (dysfunctional) world. We begin with a scene where Marcus is trying to bond with Willie while they embark on their first class project. Which is to kill somebody, by the way. Glad I never had the honor to take one of Master Lin’s Home Ec’ classes, who knows what horrors would have awaited me. After a failed attempt to have some fun, which nearly led to Willie ending up as a splatter mark from four stories up, the two discuss the nature of friendships and reputation. Marcus sees the world in very black & white economical terms. Friendships only exist to serve the needs of one person in a particular selfish fashion, not as a beneficial and mutual relationship. It’s a very mechanical view of how interactions exist in his world, and makes total sense from what we know of his background. Why seek caring and understanding in a relationship when the entire environment you live in is out to kill you? Willie sees it differently, but focuses mainly on reputation, and what your past can do to prove your worth to those around you. As we progress, our duo fails in their mission to kill a vagrant and we discover Willie’s hardcore reputation is not based on the fact he’s a hardcore killer, but rather misinformation. Our “heroes” do eventually finish their homework by the conclusion of the book and do so in a very shocking and surprising manner. I have to say, I didn’t see that one coming. Whack!

I love Rick Remender. Most of my exposure to his work is through his Marvel Comics books, mainly the absolutely incredible Uncanny X-Force. It’s still my favorite modern X-Series, by far. We’ve also got other gems, like Fear Agent, Strange Girl and the recent Black Science. The dude knows how to spin a yarn. So I obviously had high expectations for this book going in and so far I’ve not been disappointed one bit. Wes Craig’s artwork is especially moody and edgy. To me it fits this type of story perfectly. In fact, I feel his style betterÂ suits the down trodden and difficult scenes on the street, and the violence and despair that takes place there. It’s when he transitions to the high school setting that his pencils feel a bit out of place. Almost like he’s trying to channel a bit of a Harry Potter vibe with the school and it’s just too sinister for that. But overall I completely dig his work on this book. Loughridge’s colors are fantastic as well. There’s no effort to over render the colors and there’s no need to. It’s almost a four-color feel on most pages, with high contrast colors used in the fore and backgrounds. It definitely gives each panel a stark, visually striking look and compliments the pencils perfectly.

I’m not sure how to best categorize Deadly Class, or who to even recommend it to. Maybe it’s a book that doesn’t fit any one particular category but simply falls into the realm of “kick-ass storytelling.” If you like deep, fleshy, soulful characters, with a splash of humor and a heavy helping of social commentary and great cliffhangers, then by all means pick up this book. If you prefer weak stories and your character motivations spoon fed to you like yesterday’s mashed potatoes, then just keep on walking. Deadly Class is definitely part of a new breed of book, joining Sex Criminals, Black Science and Manhattan Projects as genres all to themselves. Grab this one before Master Lin has you whacked.

Score: 7 (out of 7) In high school, no one messed with me. Not because I had a rep as a stone cold killer, but because I drove a Camaro and kids wanted to catch a ride home with me. Master Lin would probably have kicked my ass.