This graphic adaptation by Jackson’s grandson Miles Hyman allows readers to experience “The Lottery” as never before, or to discover it anew. He has crafted an eerie vision of the hamlet where the tale unfolds and the unforgettable ritual its inhabitants set into motion. Hyman’s full-color, meticulously detailed panels create a noirish atmosphere that adds a new dimension of dread to the original story. 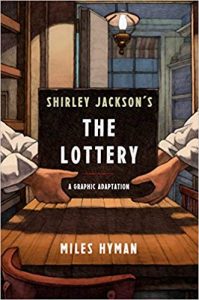 As I strolled through the stacks at the library, I spotted the cover to the graphic novel out of the corner of my eye. The name seemed familiar, something I read in school, years ago so thought may be related or a similar concept, but as I picked it up I realized it was an adaption of the same short story. And that intrigued me because for some strange reason, I can not think of many graphic novels that are based on actual fictional work. I’m sure someone will come along with a list full of them, but in the moment that book spoke to me. I had to know how did they go about adapting a short story into a graphic novel. In short, pretty well.

Much like the story it is based on, there is an imposing sense of dread running throughout the entirety of the graphic novel. In the first half of the book, this is accomplished in two things you don’t often see in comics. A lack of words. For roughly half the book, there is no words whether spoken or descriptive. It is ominous.

To go along with that, the book is filled with panels. Instead most of the pages will offer 2-4 panels per page, neatly arranged but telling a foreboding story. A panel of long, lonely streets with not a soul on it. The look at a calendar and the date. A town where houses and shops are deserted early in the day. It’s something out of a horror movie. Instead of cluttering the page with panels and action, it is instead used to build atmosphere. Little things become bigger and more focused when take up a quarter of the page. Something as simple as a character going into their pocket to pull out a pencil becomes a key moment in the book.

The page layout is in a word, cinematic. An importance is given to the placement of the camera, and angles in which things are taken. We get some great POV shots from inside the box. We get to see shots of the gathering crowds. We have line-ups of the townspeople as they pick their paper. 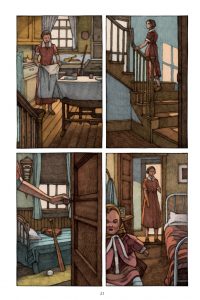 And going back to the horror movie comparison for just a second longer, I won’t ruin the story for you, but some of the final shots in the book remain me of classic zombie movies as a person is swarmed by bodies. It’s gruesome, heartbreaking and leaves you just a bit shaken when you put down the book.

The thing that stands out both when I read it years ago, and a re-read in graphic novel form, is how timeless and now timely the notion of standing on tradition is. Parts of the tradition and ritual has been lost to time, people don’t even know why or how it began, but they continue to do it because that’s how it’s always been. They think the folks who are trying to put an end to it are the crazy ones.

It’s in these moments when given the origins of “The Lottery” that Miles is really able to shine because he is able to add elements to the story to make it his own. The increasing focus on a portrait that may be the originators of the Lottery or just a family photo. It doesn’t matter who it is because like the ritual itself the idea is lost to time.

Review 7 (Out of 7): It’s a novel idea that mostly sticks the landing. And it helps that the story it’s based off of only gets more relevant and scary with time.