The A-Z of Geek Cinema: R is for Road To Perdition 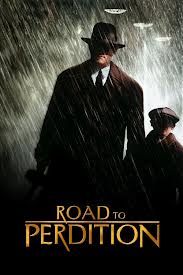 The look and feel of a film is vastly important. Different directors and cinematographers can look at the same scene as written and create completely different tableaus, with different narrative choices and focuses. Sam Mendes’ film from 2002, Road To Perdition, with cinematography done by the Academy Award winning Conrad Hall, is one such film that depends heavily on the look and feel.

With every scene shot through with darkness and gray textures, Hall and Mendes go for a very wide-open frame, utilizing a single fixed point in the depth of field. This causes the picture to feel very big, but also keeps the audience focussed on the characters, not necessarily the backdrop. Mendes apparently used the paintings of Edward Hopper as an inspiration for his composition; his work often uses a lot of contrast and negative space on the canvas to create emotional reactions. Light streaming in through windows and long shadows on the floor, people sitting alone, parts of the frame remaining empty. This holds true of Road To Perdition as well, as evidenced by many of the scenes towards the middle and end sections, especially the climactic confrontation between Tom Hanks’ “Michael Sullivan, Sr.” and Jude Law’s “Harlen Maguire.”

Hanks’ character especially is drawn out through the choices of how he’s shot and framed, most noticeably in the beginning of the film. Hall kept the camera at a distance from him, very often obscured by doorways and shadows, showing him to the audience as his son Michael, Jr. sees him:Â  a distant authority figure, but one whom he looks up to. His entrances and exits from scenes often take place in darkness, keeping the air of mystery around him until his full nature is revealed to his son in a fantastic scene with Daniel Craig in a warehouse.

The use of rain in the film is also notable, as it becomes almost a theatrical curtain backdrop in the latter half of the film. When Sullivan, Sr. is on his rampage through John Rooney’s (Paul Newman) men, he emerges from the rain as if a ghost appearing from nowhere, raining down vengeance on those he must eliminate. The rain feels almost solid, like a wall that Sullivan, Sr. walks through. Hall’s genius here was in how he chose to light the scene so that the rain would appear distinct on camera, not just as a weather feature, but as a harbinger and instrument of death. Mendes linked water and death together throughout the film, equating the “mutability of water” to the “uncontrollability of fate.”

Conrad Hall received a posthumous Academy Award for his work on Road To Perdition, though I feel it’s a film that is often forgotten of late, following as it is Mendes’ breakthrough film, American Beauty (one which I feel does not hold up nearly as well as Road.) The cinematography in evidence is breathtaking, an example of a master at his craft bending the elements to his will in service of the story that needed to be told. Just putting a camera down and hitting record will not do; you have to make the lighting and the frame sing together, to bring the emotion of the audience to your side, or even against you sometimes. But you have to be in control. 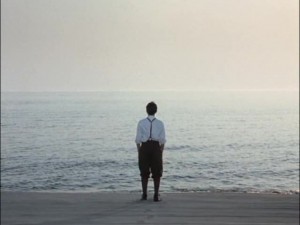