The A-Z of Geek Cinema: Q is for the Quiet Man 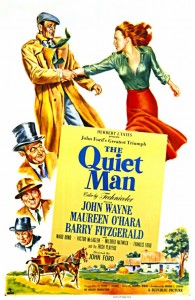 John Wayne versus Victor McLaglen in a fist fight which ranges over a good chunk of landscape and has an intermission for a drink built-in. This is The Quiet Man, an American version of an Irish film if ever there was one. Full of drinking and fighting and discussions of Irish marriage customs(?), it’s a great film, a fun film, and one that I personally love.

Thing is, The Quiet ManÂ  was shot in Ireland. Or the outdoor portions were, anyway. This adds a lot to its authenticity, and allows the film to use the beautiful countryside to its advantage. And this means a lot, as both Wayne and director John Ford were out of their filmic comfort zones. Both were mainly known for Westerns and more action-type stuff, so a romantic comedy-drama set in 1920s Ireland was so out of left field, people might have rejected it out of hand. The Duke was a badass, no doubt, but he wasn’t exactly known for his sensitive soul, y’know?

And the film allows him to be a badass still, but one with a heart. Wayne’s character, Sean Thornton is an ex-boxer, once known as “Trooper Thorn”, who accidentally killed an opponent in the ring, which caused him to quit. Only one other person in the Irish village, Reverend Playfair, is aware of this. So, during the climactic fist fight with McLaglen’s character, Squire “Red” Will Danagher, there is that ever-present sense of impending doom hanging over it. Thornton is fighting for his honor, and that of his wife, so maybe the heavyweight boxer within him comes out and he accidentally kills another. Only this time, it’d be his wife’s brother! 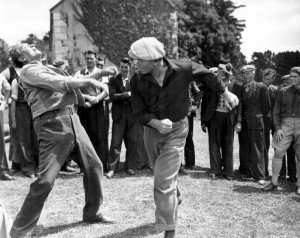 Caught up in all this drama and mishegoss, it’d be easy to overlook how stunningly gorgeous everything is. Though the indoor scenes were shot on a Hollywood set, the Irish landscape is beautifully framed and shot by Ford. I’ve actually been to many of the places where they shot the film, as I spent 9 days in Ireland a few years ago. It was amazing, how green and fresh everything was, even still today. To hell with the Blarney stone, I wanted to see Danagher’s farm. To be honest, though, I avoided the “Quiet Man pub”, as it’s become quite a tourist destination, and who’d want to mess around with that?

In any event, the film was a huge success, among the top 10 highest grossing films of 1952, and earning 7 Academy Award nominations, and 2 wins: Best Director for John Ford, and Best Cinematography for Winston C Hoch & Archie Stout. It’s entered the pop culture lexicon, mostly for the aforementioned fight scene. It seemed only appropriate as St Patrick’s Day approaches that this film should get a nice mention. Maybe someone will seek it out and be won over by its beauty and fun.