Guest Editorial: Marketing Beyond Your Brand


(This is part of our Guest Editorial service, the original article is taken from Jason’s Personal blog. Co-host of Dual Wielding.)

Successful marketing is an incredibly useful tool to get consumers to buy your product, and the world of entertainment media is no exception to that rule. There are countless examples across all forms of media of just how important marketing (or lack thereof) can be to a product’s ultimate financial success. While video games have proven to be an incredible gold mine, often generating more income than Hollywood movies, the industry as it exists now is far from sustainable. Publishers need to pour tons of money into development for today’s consoles, meaning that there is an extremely high risk if the product fails–which is why we see fewer original IPs and a market that is dominated by big-budget sequels. And therein lies the biggest problem of the games industry: the publishers don’t understand how to market their product. How many plastic instruments does one need to buy?

“But I see Call of Duty and Halo ads all the time!” one might retort. It’s true; publishers do a pretty good job of pushing their biggest brands and creating financial juggernauts. Unfortunately, that means a select few games are basically driving the entire industry, a situation that doesn’t need an insightful analyst to realize that it’s not exactly a formula for long-term survival, let alone growth. The problem is exacerbated when companies insist on pumping out new titles for these brands year in and year out, which not only burns out the developers and creativity, but dramatically accelerates what is known as “franchise fatigue” for the consumers. Just look at what happened to Guitar Hero and Rock Band: what were once the financial gems of the industry for their ability to not only move millions of units of games, but also high-return plastic instruments, are now a toxic asset that has become dead in the water just as fast as it rose to glory. (In case you’re wondering, Activision published a whopping 25 Guitar Hero SKUs in 2009 alone–a year that also saw revenue in the overall genre drop 50% to $700 million from $1.4 billion the year before).

Now, one could easily argue that the music game genre’s catastrophic collapse had more to do with Activision’s greedy higher-ups than with a marketing department failing to successfully handle so many similar products. But this argument only circles back to the underlying trend that is the fault of the marketing departments: they are not marketing the right product. We’ve already gone over how publishers focus on select franchises and try to pump out as much money as they can from these names. The fact of the matter is, they are promoting the wrong names, period. Rather than promoting the game brand itself, the publishers should be promoting the “brand” that is the talent behind these games. A bit altruistic, you might say, but let’s take a closer look by peeking over at the much-compared medium of movies. Certainly there are cases where movie studios are able to push a brand to sell a movie (Star Wars, James Bond, pretty much any movie based on a comic book come to mind). But if you think about the way most movies are promoted and hyped up, it’s usually one of two things (or a combination): the director and the actors. These studios often bank on big-name talent to bring consumers to their product. People already know they are probably in for a good movie if Steven Spielberg is the director, or if Russel Crowe is the lead actor. These kinds of “stars” do not exist in the games industry–which is entirely the fault of the people who promote the games. Of course, game development is inherently more team-oriented and less based on individual talent, but that is why the industry should start focusing on promoting its specific studios as its stars.

You may not know the Bungie name, but we're betting you know this guy!

To some extent, this has already happened. Sort of. People who follow the industry closely know the name “Bungie” carries a whole lot more weight than “Saber Interactive”, because they already know what Bungie’s accomplished and know what they bring to the table. Bungie hasn’t announced so much as a title or even genre for their next game, but gamers are already salivating for it. The real money, however, is not in the people that already know what games they are going to buy, but rather the mainstream market that pretty much bought their Xbox for Call of Duty, Halo, and Madden… because that’s all they know. You’re average Joe probably doesn’t know the difference between an Infinity Ward Call of Duty game and a Treyarch Call of Duty game. The existing practice obviously devalues the developer, but that’s not as important to the publisher’s bottom line as the eventual sales, so they promote the game brand, which they have more control over, instead. However, incentives exist for publishers as well. If publishers start promoting their studios rather than the game brands, they’ll be able to create completely new IPs (and to them, potential new series/franchises) on the backs of those developer names alone (i.e., without the high financial risk usually associated with a new IP). They don’t have to waste money explaining why Game X is the next big thing while not-so-subtley hinting that its sequel is already in the works and will be even bigger. Instead, they can simply say, “this is the newest game from Bungie.” Boom, millions of copies sold, done deal (the studio has to actually make a good game of course, but a studio that is able to consistently feed their creativity is far more likely to be working as hard as they can).

This is a bold proclamation that might seem like a too big of a step for the industry’s tepid publishers. Luckily, there is already an example of this practice achieving mainstream success. For years, Rockstar was known for one game franchise and one game franchise only: Grand Theft Auto. Anybody who’s reading this knows that those games don’t need any introduction. It’s a game brand that practically prints money. Or is it? Last year, Rockstar unleashed their latest project, and it wasn’t a game about urban crime. Rather, it was a brand-new game set in the Old West. It was called Red Dead Redemption and went on to sell millions upon millions of copies and is heralded as one of the best games of last year. 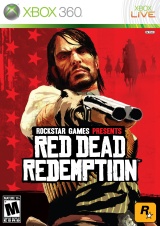 While the game is technically a sequel, it shares no ties to its under-the-radar predecessor, which wasn’t even originally developed by Rockstar (the former Capcom game was dumped and Rockstar swooped up the rights, pushed it out, then geared up for the project it really wanted to do). How could what is essentially a new IP make such a splash right out of the gate? Because Rockstar was able to promote the Rockstar brand instead of the game’s brand. Very clearly above the title, and before every trailer and commercial, reads a line that says, “Rockstar Games Presents.” As in, “Rockstar Games Presents Red Dead Redemption.” At the very least, pushing their name on the front of the box puts their name out for the future, so even if you didn’t know they made GTA, you’ll know they made RDR when they ship their next game (which, by the way, is L.A. Noire, which will also carry the “Rockstar Games Presents” tag on its box).

By doing this, Rockstar has taken steps to promote the Rockstar brand. Suddenly, the company has two mega-blockbusters, yet its next two games (L.A. Noire and Max Payne 3) are not from either of those franchises. They have been able to successfully promote the Rockstar name, which allows them to explore game ideas in all sorts of stories and settings, rather than endlessly iterating on GTA until consumers finally get sick of it. Not only that, but when Grand Theft Auto V eventually does drop, it will come to applause and fanfare for returning from a long absence, which generates all sorts of hype on its own. And in the meantime, Rockstar is still making a pretty penny on other, brand new titles, because people know that it’s not that GTA is a good game, it’s that Rockstar is good at making good games. Being able to say “from the studio behind Grand Theft Auto” is an incredibly powerful marketing tool, and one that is scarcely used in the game industry–somewhat baffling considering how often you hear similar phrases in movie trailers. Promoting the talent will allow developers to create all sorts of new games, which will stave off franchise fatigue, foster creativity (which is good for the entire industry), and reduce the dependence on big-budget sequels. This process means more creative freedom for developers, a wider portfolio for the publishers, and a whole wealth of different experiences for the consumers. It’s a win, win, win. Us “hardcore gamers” already know the great studios. It’s time the rest of the world finds out as well.