With her big screen solo adventure not coming until June, Diana Prince has certainly been keeping herself in the public consciousness. From being celebrated amongst the SJW crowd last month when current series writer, Greg Rucka, highlighted her not-so-hetero preferences to being named an honorary UN ambassador last week, Wondy is still making headlines going in to her 75th birthday. But with such a raised profile, is the current funny book interpretation doing her justice? 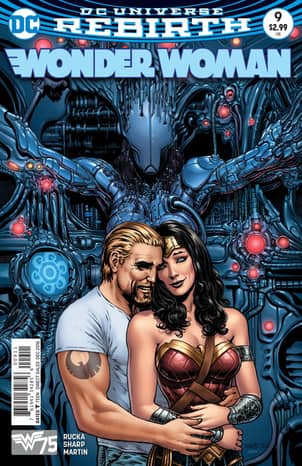 I will be the first to say this storyline has taken its sweet time to get rolling and the alternating story arcs, while an interesting concept, have not done it any favors. However, if issue #8’s title (“Interlude”) is any indicator we may have done enough world building and can start playing in the sandbox.

As it stands, Cadulo and Urzkartaga (the first major villains of the arc) are defeated, the latter being reduced to a literal houseplant. Urzkartaga’s defeat has broken the curse on Dr. Barbara Ann Minerva, trading Wondy’s cannibalistic were-cheetah enemy for a highly competent and cooperative ally. And what is the first thing you do when your girlfriend has just regained her humanity: GO SHOPPING! Naturally, Diana draws a massive crowd (“There has always been an undue interest in my wardrobe”) which creates an opportunity for Sharp to let loose a “Where’s Waldo”-esque splash, complete with various writers’ and artists’ names sprinkled in as easter eggs.

A certain baddie from Rucka’s Wondy run in the early 00’s emerges for a few panels, seemingly guiding the course of events unbeknownst to our protagonists who are working to locate Themyscira. Meanwhile, our superheroine goes on a much-deserved date where *ahem* a certain flying reporter comes up in conversation (awkward!). Rucka’s talent shines in these intimate character moments but it is Sharp’s art and Martin’s lush color work that really take the cake. Details from the wind rustling Diana’s mane to the interplay of shadows from the setting sun help sell this tender scene between estranged lovers.

“Year One” continues next issue while “The Lies” is to conclude in issue #11. As much as I would like more answers than new questions in the next few chapters, if the art looks this good Rucka can take all the time he wants.