Review: Serenity No Power in the ‘Verse #1 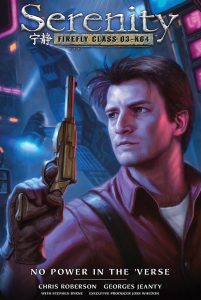 After a kind of going through the motions cold open that doesn’t measure up to the bar fights and heists in the Firefly TV show, Serenity No Power in the ‘Verse #1 finally finds its footing as writer Chris Roberson and the art team of Georges Jeanty, Karl Story, and Wes Dzioba dig deep into the richly developed crew of Serenity, their relationships, and vulnerabilities. For example, Jayne (even though he is a badass with a big gun) struggles with loneliness as seen in a grey tinged flashback scene of him lifting weights with Shepherd Book. In the current crew setup, Mal and Inara and Kaylee and Simon are in relationships, and Zoe has her daughter Emma while River has her brother and is both the onboard babysitter and pilot. He has no one. But his lonely life isn’t the main focus of No Power in the Verse #1 as the crew of Serenity looks for the missing friend Bea (who appeared in the last miniseries), who may be involved with the Peacemakers, a group of Browncoats, who have turned to terrorism.

Compared to Serenity: Leaves on the Wind and his work on Buffy Season Eight, Jeanty and Story have a much looser art style, which works better for both storytelling and facial expressions than their earlier attempts at trying to capture the likenesses of the Firefly actors. Jeanty’s style can be a bit odd at times as occasionally Captain Mal looks like a manga character, and River and Inara look like they’re the same age. His clothing choices for Wes Dzioba’s 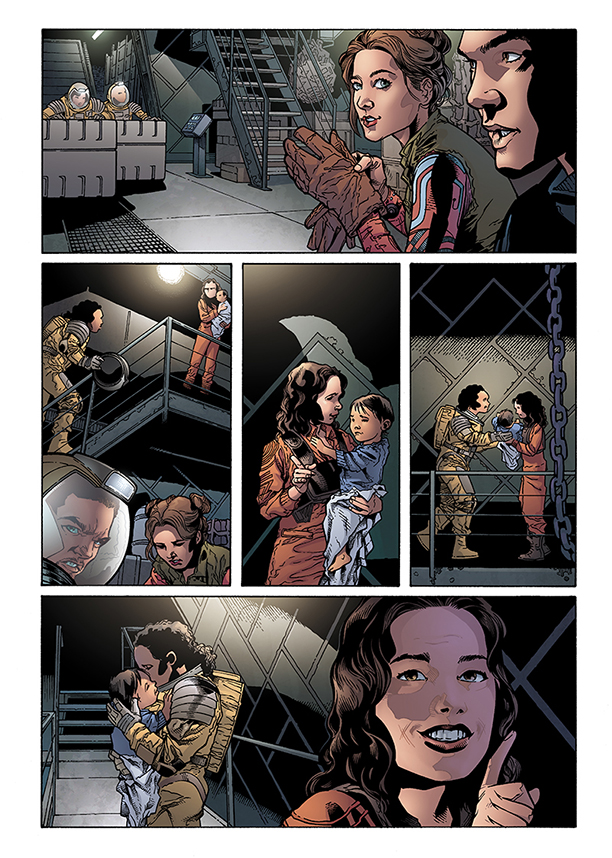 colors are nothing to write home about compared to the greens and earth tones that Laura Martin used in Leaves on the Wind, but have enough shadow in them to show the claustrophobia of space and the city that the crew finds themselves in. This city doesn’t have much personality though.

The character work in No Power in the Verse #1 through Roberson’s dialogue and Jeanty and Story’s art is what makes the next issue worth picking up. Before even setting up the miniseries’ main plot, they let us spend some time with the crew of the Serenity putting the things which make us love or hate them on display. There is River rescuing Emma from almost drifting into space with her “enhanced” skills, and her warm relationship with the toddler as Simon lovingly looks on. She has really come a long way since getting smuggled in a crate by her brother back in the first episode in Firefly. Inara also starts to open up about her past with Mal as they grow closer in their relationship. There is also a very funny “size” joke in there somewhere as Roberson brings a nice sense of humor to the writing as he goes for broader gags instead of the Whedon-y quips. However, it is nice to see a writer bring their own voice to the Firefly universe.

Although it takes 2/3 of the issue to get going and rests on caring about a kind of forgettable supporting character (who had a great haircut though) from Leaves on the Wind, the former Browncoats vs. former Browncoats conflict is more refreshing than yet another fight against the Alliance or the Reavers. Mal and his crew are just trying to survive in the ‘Verse and have put away their revolutionary days behind them. But the cause of the Resistance is alive and well with the Peacemakers, who Mal describes as terrorists. Most of what we know about them is exposition, but Jeanty and Story deliver a powerful image of a group of kids pointing guns at Serenity‘s crew to show that this group is potentially dangerous and is endangering children. Hopefully, the next few issues are a wild ideological

Serenity: No Power in the ‘Verse #1 has its work cut out for it with an underwhelming action sequences and some poor art choices. But Chris Roberson, Georges Jeanty, and Karl Story have a handle on how these iconic characters relate to each other, the plot has just a whiff of originality with the not so plucky Browncoat extremists to provide some hope for future issues’ improvement.