Citizens of Earth is a new RPG release from Eden Industries and published by Atlus. It’s purchasable this week on Steam, PS4, PS Vita, Wii U, and Nintendo 3DS, and I know it’s something more than a few people have been looking forward to it. The game itself is a sort of tongue-in-cheek look at typical RPG stories, offering you the role of Vice President of Earth. You explore and solve some problems that come up in the city, tracking down the source of the issues and confronting the enemy.

I’d like to start with some discussion about the mechanics of the game, and RPGs as a whole, really. One thing this game does quite well is give you a really impressive array of things going on. It’s rare that you will find an enemy that isn’t capable of some kind of strange thing; i.e. you don’t have to just slay rats that can do nothing but generic attack for the first 2 hours. Coffee beans randomly sprout into super large ones, giving them different attacks. The cops you fight may stun you with a stun gun. Flying insect … things… have bubbles to absorb hits. This all adds to the complexity of the game in a very nice way… initially.

You’re given the choice of a total of 40 different townspeople to choose from, each of which have their own play style and abilities, both in and out of combat. Your brother is a bruiser that can protect friendlies as well as dish out some damage. Outside of combat, he can boost other people’s health when they level, and also order consumables for you as a sort of walking shop. Each character of the 40 is just as detailed, with many combat skills to choose from and unique non-combat benefits when given a position on the team. 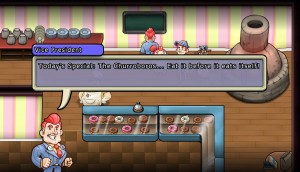 That said, the game does have some significant issues. Overall, the play is a bit slow and cumbersome and that partially has to do with the implementation of combat. It’s a little slow to animate, difficult to speed through, and can feel tedious at times. Other times, completely super random things blow up your world. An example or two may help clarify.

Early on, the people in my party had about 30 hp each. One turn a coffee-nerd-guy-robot(?) hit me for 1 damage. Sure, obviously no big deal. The next turn, he hit someone on my team for 14. That’s a pretty huge variance, going from 1/30th of my hp to 1/2 of my hp from the same guy, same attack. It goes both ways, sure. Brother critically hit something for 60 damage. Of course, the next turn he hit its friend for 2. When you add in the random factor to other combat aspects as well, it can get difficult. Coffee beans randomly morph into huge coffee beans, dropping all debuffs and fully healing. As huge coffee beans, they also randomly summon new small coffee beans… which then morph into big coffee beans. You see where this is going. Between the wild differences in what I hit for and the random full heals/new guys, I had a fight where I went through 8 enemies until I finally died; Mom’s healing of 3hp every other turn just couldn’t keep up.

Outside of game mechanics, the UI and game itself also have some issues. I had a fight stick plugged into my computer and the game immediately defaulted to that and the keyboard took no inputs rather than switching to whichever device was being used (also, this is definitely not a keyboard and mouse game, you’ll very much want a controller for it). Okay, sure, just avoid that. Anyway, when given a Yes/No choice, the Yes is in yellow, indicating it’s default selected, while the No is in red. Oops, no, they are just different colored buttons, there’s a thin white highlight area around the button that determines what’s currently selected. Another time I was trying to speak with a potential recruit and also got attacked at the same moment… and post-fight couldn’t move anymore.

There’s also some visible polish lacking. The game is super loud. I mean, I had headphones on that I took off my head and put on the desk, playing that way. Why? Because there’s no volume adjustment in game. I don’t mean for voice/bgm uniquely, I mean at all. There’s no volume adjustment at all. Of course, yes, you can go change the master volume on your computer (I had the Steam copy), but that doesn’t seem like something I should have to do. On another note, it’s often quite difficult to fully grasp what is going on with the UI for the things that are there, as well. It has been created in a very flat, very basic way, but I still find myself confused on things until I put in significant time to understand how they work. I spent plenty of time completely unsure of if I had any gear actually equipped on my team, for example.

On it’s face, Citizens of Earth is a bit cheesy, that’s clear. It’s not necessarily a bad cheesy, but some of the mechanics don’t always accent that cheese in a good way. In terms of story, it’s fairly entertaining. You’re the Vice President and act kind of like a stereotypical one would; with reckless abandon for the 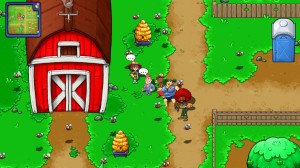 Beeeees! (Like I could NOT caption it that way)

people you constantly throw in your way to take care of your problems for you. It can be amusing, but also can wear after a while. In fact, that’s sort of a common theme. You have a pretty huge number of people from the city that you can recruit, but their voices and catch phrases are few and can get repetitive.

I don’t mean to sound like I’m really down on this game, I’m not. The mechanics are actually really entertaining and engaging. The combat, when it’s not grindy combat against the same mob types over and over, is rather enjoyable. Once you understand how the game works, it really does open up a very free-flowing and play-as-you-like type of approach to the common RPG. I wish they had twice the budget or time or whatever the constraining factor on the game was, so that a real gem could have been created.

As it stands, however, the issues I listed out above do tend to get in the way. If you’re looking for a new RPG that you can pick up pretty cheap (~$15) and sink some hours into, something with solid game mechanics and a very open team composition, Citizens of Earth would be a great pick up for you. However, if you’re not looking for that exact thing, chances are you’ll find yourself frustrated with the faster-than-you mobs that chase you down and force combat, the rather unwieldy UI, or the blaring and potentially repetitive music.