I love the spy genre, it’s a fact that I hide poorly. I love the action-spy genre even more. You wouldn’t imagine how excited I was when I discovered Velvet last month, and caught up on the first two issues. Extremely solid reads. 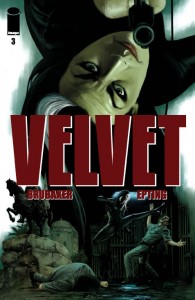 Velvet 1 was used as a way to set-up the world and more importantly the mystery of the series. Velvet 2 was used to really dig into the main character and her past. What would be Velvet 3’s main objective? At the end of the issue, I couldn’t really tell you. It’s pretty early in the series, but I felt this was just a filler book. Let’s get to the review for more!

This comic picks off right from the end of Velvet 2, Velvet has escaped her pursuers and got out of the city with the help of a friend. Sadly for them, they got out of the city on a boat stolen from a major mob player and are held at gunpoint. Or so it would seem, Velvet’s companion, Burke, quickly dispatches of the hired help that were holding them up as Velvet comes up with a plan to track down Agent X-14’s path before his death. The rest of the issue for the most part deals with Velvet and Burke creating a plan to gain the first major lead and improvisation when things go south. It ends pretty brutally, but also with no real ground gained on the overall plot of the series.

Chapter 3 features some pretty solid spy-work. We start off with Velvet breaking into prison and we aren’t quite sure why until later in the comic, I’m a sucker for cold-openings! Then there’s the aforementioned scene at the dock, which is played more for laughs then anything. What I found interesting was Velvet using her sexuality to gain access to vital information for her mission. It’s a staple of the spy-genre, but for some reason we always shy away from it when women do it. In this case, we get to see Velvet is willing to do anything to accomplish her goal, and this is also somewhat played for laughs at first.

My overall problem with the issue though is it felt like filler. A filler issue on its own isn’t a bad thing, and this is a pretty solid story from start to finish. I just found it weird that we’re 3 chapters in and it already fills like stretching it out a bit. Perhaps, things will look and read differently when issue 4 drops, but for now this just feels like a short stop on a solid series.

The art in this book is great. It’s a weird thing to say, but going for a more realistic and grounded look really does make this book stand out compared to a lot of comics on the market. The color usage is great especially for backdrops. The red-ish night sky during the opening scene at the docks or the play on lighting when she is sneaking through the dark and being a super spy. It really does shine on page. Also because always a sucker, some detailed backgrounds that help bring the world and rooms to life.

Review: 5 (out of 7) – The story and characters are still interesting and fun to watch. This just loses points for not feeling like a necessary read for the series, and it’s only issue 3!Â