Today marks 20 years since Superman: The Animated Series graced our screens for the first time. To celebrate such an occasion, we’ll be sharing some #Supermoments on our Twitter along with our readers.

But we’re also here to celebrate by counting down the 7 Best Episodes of the show’s run. For the sake of convenience since the show was big into serialization, we’ll be lumping multi-part episodes together for a single entry.

With all the words out of the way, let’s begin our countdown! 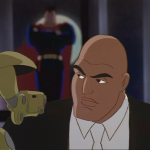 Last Son of Krypton – Like all good stories, we begin at the beginning. Last Son of Krypton does a terrific job of condensing Superman’s origins and first adventure into 60 minutes. We get to see a Krypton’s destruction, Clark’s early days in Smallville and of course his trip to Metropolis. Not only does it serve as a great introduction to the world, but showed us from the get-go it would be different from BTAS in serializing its stories.

6. Stolen Memories – We learn in the previous entry that Brainiac was around for the destruction of Krypton, and hid vital information from the counsel for his own gain. When he discovers the last remaining Kryptonian, he makes a voyage to Earth where he looks to catalog the knowledge of Earth and its inhabitants as well. A great proper introduction to Brainiac, who would continue to be a thorn in Superman’s side all throughout the universe. 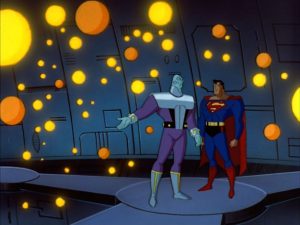 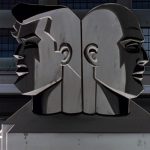 5. Brave New Metropolis – Alternate realities/parallel dimensions is an old trope in the genre, but when it’s done well… it is something special. Lois is transported to another world where her death led to Superman teaming up with Lex Luthor and creating a pretty dystopic Metropolis. A great episode that examines the dynamic between Lois and Superman and how in many ways she grounds the Man of Steel.

4. Legacy – The show’s series finale finds Superman being brainwashed by Darkseid and doing some major destruction to Earth and its heroes. But this is also a story of redemption, and I like that the show doesn’t end with the citizens of Earth just accepting Superman, and it is a plot-thread that does form the basis of a lot of Justice League/Unlimited. Continuity!

3. Knight Time – Because the shows were connected, there are several crossovers between The Man of Steel and The Dark Knight, and while the “World’s Finest” may be the most iconic of the bunch, Knight Time to me is the best. In a fun little twist, Superman must fill in for Batman when he goes missing and is assisted by the new Robin, Tim Drake. Their dynamic is fun and playful, and seeing “Batman” overpower his foes is a treat for the audience and a shock for his foes.

2. Apokolips… Now! – Darkseid and his forces finally invade Earth, and it’s a pretty bleak confrontation. If not for some last minute intervention from the New Gods, Earth seemed ready for defeat. It was just a great opening volley in the saga that is Darkseid vs Superman, and ends on one of the saddest notes of the series.

1.  The Late Mr. Kent – It’s ironic that the best episode of Superman: TAS is more of a Clark Kent episode than Superman one. There’s always been discussion on whether Clark or Superman is the disguise when in actuality they are two-sides to the same coin as shown in this episode. Superman can’t always be Superman, and Clark has a reputation that he likes to maintain and be “human” with. The episode is also really great for just feeling different than the rest of the series, going with a more film noir approach with narrations and flashbacks. If you check out one episode of Superman TAS make it this one!

So what did you think of our list? Did we miss any of your favorite episodes? Any that you want to re-order? Let us know in the comments below!