Talk of the Town: The Incredible Adventures of Van Helsing

The Incredible Adventures of Van Helsing is an action—RPG in the same vein as Diablo or Torchlight. And when I say “in the same vein” I mean, pretty much exactly like Diablo or Torchlight. I’m not an aficionado of Diablo-styled action-RPGs; I’ve only played a couple of them, so I’m not savvy enough to appreciate all the small differences from clone to clone. I’m sure there are people out there who can make a case for how different all these games are and show me graphs using math equations, just like how diehard fans can do for the PokÃ©mon series or fighting games. However, to my untrained mind, this game is just like Diablo. That’s not a bad thing; at least not to me, because as I’ve said before I haven’t played too many Diablo clones so I’m not sick of the loot-driven point-and-click style of excitement. 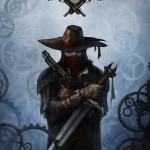 You play as the son of the famous vampire hunter: Abraham Van Helsing, who also has the same name. Following in his father’s footsteps, he journeys to the fictional land of Borgovia to hunt the overwhelming amount of mythical creatures there. He is accompanied by his undead lady-companion: Katarina. They don’t really go into too much detail fleshing out the backstory of Van Helsing or Katarina and instead focuses more on the task at hand which is to find a town and trek further to Borgova, the capital of Borgovia. The preview build is only a couple hours long and takes you through the beginning areas through the first town and to the areas shortly after that, so clearly there is much to learn and discover.

I really can’t tell what the tone Neocore Games is going for with The Incredible Adventures of Van Helsing. The overall atmosphere is grim and bleak, but the dialogue seems like it’s self-aware and completely comical, with the exception of Van Helsing himself. It’s almost like this self-serious man was thrust into some kind of comedy. Katarina certainly has no shortage of witty remarks throughout the adventure. Personally, I find the dialogue to be cringe worthy. I think they’re trying too hard and the punchlines kind of miss the mark every time, not helped by the mediocre delivery with the voice acting. 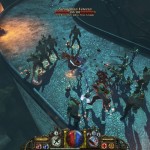 Now let’s get down to the meat and potatoes. Short version: You click on enemies, get loot and equipment, and upgrade your tech tree. Long version: You have two different types of attacks that you can use to fight your enemies; long-range and short-range, and you can switch it out on the fly. You can also switch Katarina in the same way, so you’re able to formulate any kind of strategic combination that you wish and spec your abilities in the direction that you feel comfortable with. While it’s nice to have a companion around to act as a mule for your equipment and fight alongside you, unfortunately, she dies rather easily and quickly becomes obsolete. Which brings me to my next point: this game is hard. The amount of monsters this game throws at you at any given time is insane, and especially coming from the ease of Diablo 3, you need a lot of patience here. The difficulty gives rise to strategies that you would find in an MMORPG by standing back and pulling enemies with your gun and whittling away at them until they get close enough to melee. I’m sure the progression of this will change as the game goes on, but in the beginning this is definitely not a game that you can just rush through.

Another pretty cool part of the gameplay is that you have this Rage meter that you can use to temporarily boost your attributes, but not only that, you can also mix and match power-ups (up to six of them I believe) which uses the Rage meter so you can create unique combinations from defensive to offensive enhancements. And lastly, when you die you have the option to spend money to respawn on the spot, or at the last checkpoint. This is a great addition due to the difficultly of the game; it makes it a lot more manageable.

There are obviously some ups and downs with The Incredible Adventures of Van Helsing, but it’s hard to fully judge based on this preview build. My initial reaction is that I like it. It’s not at all mind-blowing, but it seems to be a pretty solid game that’s quite a bit of fun. Also, co-op is not available on this preview build, which seems like it could be an important part of the experience.

The Incredible Adventures of Van Helsing will be out on May 22nd, 2013 on Steam and Xbox Live Arcade.