Talk of The Town: The Flash Season 3

Where We Are: For most shows this is a fairly straight-forward segment, for The Flash… it’s complicated.

Let’s begin with what actually happened during the finale of season 2. The Flash was able to defeat his rival, Zoom, in what amounted to the world’s most complicated race with past versions of our hero colliding with his foe. After Zoom’s defeat, Harry and his daughter, Jesse, returned to their life on Earth-2. 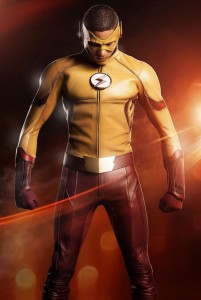 In the West household, Wally was finally let in on the secret that Barry is The Flash. And during an incident earlier in the season, Jesse and Wally were blasted with particle energy and we still are waiting to see the fall-out from that. More importantly (for some), Barry and Iris were finally on the same page and decided to see if they can make a relationship work.

We finally discovered who the Man in the Iron Mask was… as it was revealed to be the actual Jay Garrick. The Flash from another Earth, who bares a striking resemblance to Flash’s father, Henry.

Everything seemed to end on a happy note for Team Flash… then it continued.

Barry after spending his entire life dealing with his mother’s death, now has the fresh wound of his father’s death thanks to Zoom. Barry having the ability to change the course of the past, an action that his future self and pretty much everyone else advised against, decided to go back to the night his mother was killed and stopped the murder from happening. And ladies and gentlemen, we are in for a brand new world at the start of season 3…

What To Expect: Flashpoint!

Honestly, anything is on the table at this point. Will Barry still have his powers? Doubtful, but what of the particle accelerator? Does it still go off? Are the Rogues still created? Does another hero take on the mantle of The Flash?

What will Barry’s reaction be to his new world? He will (hopefully) have his mother and father back, but as we have seen before retain his memories of his other life. Is he still close with Joe and Iris if he didn’t move in with them? He never would have met Cisco and Caitlin… does Wells get taken over by Thawne?

Well we look forward to see what happens on The Flash (and the other SuperFlarrowVerse shows) when it returns this October!