Dark Horse is releasing Star Wars: Legacy #2 today, continuing the story of Ania Solo in the Legacy Era. For those unfamiliar with the Legacy Era, this story in particular is aimed at 138 years after A New Hope. The creative team above, unsurprisingly, remains the same from issue one for this nascent title. Issue one left me with some mixed impressions, so I was interested in seeing what issue two did with what potential the first offered. 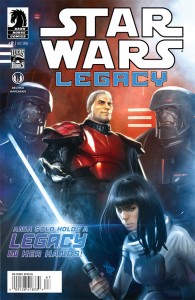 As far as art, I’ll mostly be rehashing what was said about one. The art is very harsh, heavily inked, astonishingly busy, and centered around shadow. It does feel very much like homage to me, much in the vein of older Star Wars comics, such as the Dark Empire series. If you have experience with that series, you already know exactly what I’m talking about. The downside of such a tribute is that, personally, I thought it looked awful then and I still believe it looks awful now. Everything is so heavy, I feel like my eyes are wading through mud to try and discern any useful details in the pages. Faces are often just blotches of black or have significant features, such as eyes, completely blotted out. Bodies are covered in shadowing scribbles in thick series of lines. The frames are very basic, all standard rectangles, and the perspectives are nearly all straight on from a horizontal vantage. To be fair, the simplicity of the frames and perspectives are not necessarily bad, just not particularly interesting, and, given my opinion on the art, particularly interesting would be helpful. The colors do well, however, and add some much needed dynamic to the art, but simply aren’t enough to carry the art alone.

As for the story, I’m afraid there isn’t a lot to say. On the good side, lots of events happen, which is nice. Typically, second issues tend to flesh out the players some and are usually rather heavy on the exposition as characters use “As you know” types of phrases to provide contextual information. On the other hand, despite all of the events, not a lot actually happens. The story opens with Ania having been caught and running from her pursuers. Well, (mild spoilers) she gets away. And is hiding. And gets caught. And runs away. And then is hiding. And gets caught. End of book. There are other moments where some different characters get a few frames explaining motivations or are further detailing their positions and dispositions, but on a straight ratio of “Ania stuck in this cycle” pages to “other,” it’s about 16:6. To clarify, sixteen of the twenty-two usable pages are cycling though Ania getting caught, hiding, or running. Â Six are given to other topics. Hopefully that puts into perspective what I mean when I write about how a lot of events happen, but not much is really furthered. Ania is still in this torrid whirlwind of escaping and the only actual movements forward for the plot are the acquisitions of some very few pieces of information.

All that said, it’s not a bad issue two, but while I feel it is avidly working to keep momentum going rather than fall into the typical expositional method that second issues so often fall prey to, it ends up making a lot of action with little consequence or actual impact on the overall narrative. To be fair, I don’t know what the overall narrative actually is, so this is all from a limited perspective, but, then again, continual progression is the key to episodic storytelling where the narrative doesn’t become stagnant. Either way, it’s quite early in the series, and although I vehemently dislike the art style, it’s not a bad start. Personally, I love the way the Legacy universe was constructed back with the original Legacy release, so I will be continuing to read and see where Ania can take us.