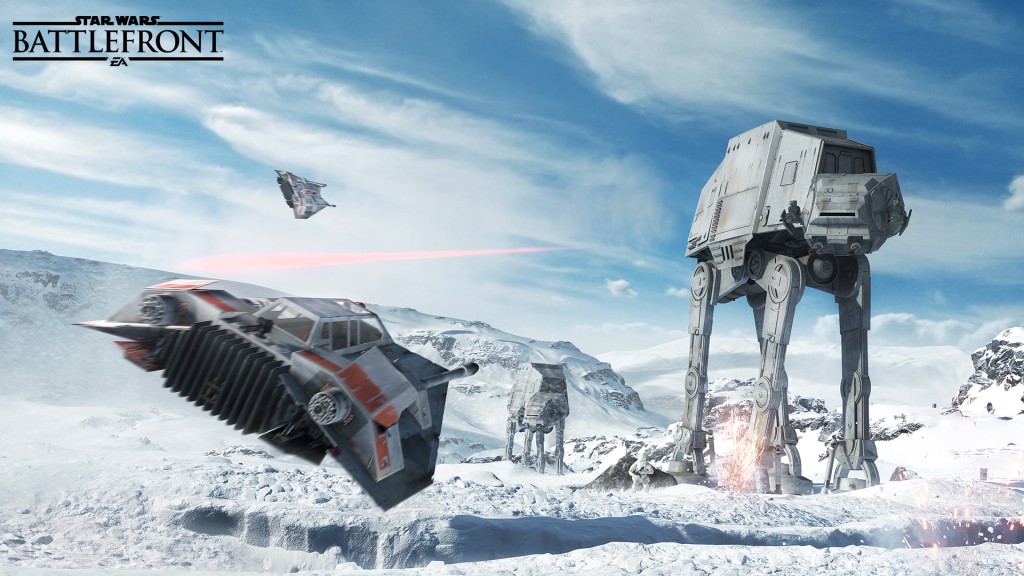 Tomorrow, October 8, EA will unleash the Star Wars: Battlefront open beta unto a legion of eager, salivating fans ahead of the full game’s November 17 release date. It marks a first salvo in a new era of Star Wars video games, which, following the demise of the venerable LucasArts, amounts to a sort of franchise-wide reboot, similar to how The Force Awakens will launch a new wave of Star Wars films come December. Luckily for you, avid reader, you don’t have to wait to find out how the game is shaping up–we’ve already played the Beta, and we’ve come away very impressed so far!

Ed. Note: Due to time constraints, I was unable to upload my own gameplay footage, so I have embedded publicly available YouTube footage for your reference.

First thing’s first in case you haven’t checked out the footage from E3 and other trade shows: if you’re wondering whether Battlefront will be DICE’s long-running Battlefield series in a Star Wars skin, the answer is…sort of? There are some clear, major departures from the Battlefield formula: there’s an emphasis on firing from the hip (there’s no aim-down-sights, although there is a scope mode), there aren’t as many options for weapon customization, and load-outs are largely centered on equipping three perk-like attributes that can be deployed at any time. Rather than jumping into vehicles at a home base, they’re acquired by picking up holographic power-ups on the field of battle (at least in the modes we’ve seen so far). With enough success, players can also temporarily jump into the shoes of some of the more iconic (and powerful) Star Wars characters. All that being said, DICE’s previous experience can definitely be felt in the game’s DNA; movement and damage are very similar to Battlefield, and the military series’ penchant for setting a high bar in visual fidelity is definitely matched here. Battlefront is a gorgeous game. The Frostbite engine feels like it was built for Star Wars and many of the iconic, meticulously recreated suits, vehicles, weapons, and locations look like they jumped straight out of the original trilogy of movies.

As far as what’s available to play here, Battlefront’s Beta offers 3 modes: Walker Assault, Drop Zone, and the co-op Survival mode. Walker Assault is essentially DICE’s attempt at translating their most successful Battlefield modes into a Star Wars game; instead of 32-player Rush and 64-player Conquest, which are large-scale battles that focus fighting onto a handful of objectives, the 40-player Walker Assault…well, focuses fighting on a handful of objectives. Instead of mere capture points, however, objectives are based on which side of the Galactic War you are drafted into in the lobby. Set on Hoth, Imperial forces are marching to destroy Rebel installations in a scene reminiscent of the opening battle in The Empire Strikes Back. Most of the time, you’ll be fighting on the ground as an Imperial Snowtrooper, climbing snow dunes or rushing through trenches and blasting any rebels you come across. Occasionally, you’ll come across power ups you can pick up that give you a little more firepower by placing you in a number of signature Imperial vehicles: TIE fighters, AT-STs, and even the mode’s eponymous, lumbering AT-ATs. Unlike the other vehicles, which you can control until you are killed, your run in an AT-AT is on a 60 second timer, during which you can use the walker’s formidable firepower to destroy as many rebel targets as you can before reverting back to standard Snowtrooper.

On the Rebel side, you’re objective is basically to destroy the walkers. In order to do this, you must defend Rebel uplinks from the Imperial attack, which eventually allow you to call in a Y-Wing bombing run to essentially stun the AT-ATs and make them vulnerable to further damage. That’s right, there’s no using tow cables to go for the legs here; it takes a lot more work to bring down a walker than it has been in other Star Wars games. One other notable feature of Walker Assault is the ability to assume the mantle of one of the hero units; with enough success on the battlefield, high-performing players can become Darth Vader (on the Imperial side) or Luke Skywalker (on the Rebel side), the latter of which is curiously his robot-handed, green-lightsaber-wielding Return of the Jedi variant. This is definitely not the Battle of Hoth you watched in Empire, but rather a sort of sandbox version of it. Unfortunately, I have not yet had the chance to play as one of the hero characters myself yet, but fighting both alongside and against them, I can say they are formidable and seem appropriately powerful without feeling too powerful (it usually takes a group of troopers concentrating fire to bring one down). Luke does run disturbingly fast, which I guess can be attributable to his mastery of the Force, but I’m very to see how other, non-Force-wielding hero characters fit into the skirmish.

Drop Zone, by comparison, is a more intimate, stripped down affair. Set on the volcanic planet of Sullust, the playing field is limited to 8-a-side and the vehicular and hero power-ups are nowhere to be found. Gameplay is centered around escape pods that drop one-by-one onto the battlefield, and each team must fight to capture each pod king-of-the-hill style in order to score a point (the team with the most pods at the end of the game wins). However, there’s small twist: continuing to defend an already-captured pod yields power-ups that offer a boost in firepower, such as a mounted turret. This creates an interesting conundrum: do you press on to the next objective, or hope to score a power-up that could potentially turn the tide of one of the next capture attempts? While mostly fun, when paired with less enthused combatants the skirmish can devolve into a deathmatch, and Sullust turns out to be pretty disappointing visually–rather than the brutal volcanic atmosphere depicted in some of the released art work, Drop Zone on Sullust is more of a barren wasteland that looks like it was carved out of one of the more generic sections of Fallout 3. One notable highlight is a part of the map that has a crashed TIE fighter burning on the battlefield–a nice touch and a reminder that this is very much a Star Wars world.

Of the three available modes, Survival is the one I had already gotten a chance to play at E3, and it’s just as impressive 4 months later. Of the three planets on offer, Tatooine is by far the most visually impressive, in large part due to the excellent lighting from its twin suns and the contrast between white Stormtroopers and the tan canyons of the map. Gameplay-wise, it’s pretty standard Horde-mode-style fare: waves of increasingly difficult enemies charge at you from all directions, and you and your partner are tasked with surviving until the end (the thin narrative context is that your extraction ship is waiting for the Imperial presence around you to be neutralized). There are some light shakeups as you progress, such as optional pods that drop into the map to offer some needed ordinance resupplies, but overall, it’s what you’d expect out of this kind of mode. That being said, there’s a certain, indescribable sense of dread the first time an AT-ST lumbers around the corner and turns toward you, and an equally thrilling sense of jubilation when you blow up said AT-ST with a proton torpedo while you’re using a jetpack boost with only a sliver of health remaining. One more interesting thing of note with Survival is that the Beta has you face 7 or 8 waves, but the post-match loading screen indicates that the final game will task you with surviving 15 waves, so it’ll be very interesting to see what types of units get thrown at you later on.

The three modes together give a great sense of the game and should offer plenty of cannon fodder to decide whether you’re interested or not. For someone like me–an avid Star Wars fan with a proclivity for first-person shooters–Battlefront is a dream come true. Only time will tell if the gameplay loops DICE has built hold up over extended periods of time, but in this initial phase of getting to know the game, it’s hard to subdue the excitement and pure joy of running through these battlefields, blasters in hand, and facing off against or with some of the most iconic pieces of Star Wars. Ignoring the gameplay foundation for a second, one of the most impressive parts of Battlefront is how much its battles feel like Star Wars. John Williams’ score ratchets up and down as the fight progresses, TIE fighters whiz overhead with that signature hum, blasters sound exactly the way that THX made them three decades ago, and off in the distance, players can witness a larger battle unfolding overhead (even if it’s just set decoration, it adds a tremendous amount of life to the environments). There are other little touches here and there that show how much attention DICE has paid to the little details in order to make Battlefront a game worthy of the Star Wars name, and it shows. Fans of FPS games should definitely give it a run, but for fans of the original Star Wars trilogy, Battlefront is a must-play.

P.S. – In typical EA fashion, “Beta” is sort of a misnomer for the playable slice being offered to gamers this weekend. With that November 17 release date around the corner, this is more of a limited time demo; any insight or bugs that come to light will likely be relegated to a post-release patch for the game. Given how online-dependent Battlefront is, here’s hoping that at least the stress testing afforded by such a widely available Beta means the server issues that have plagued recent EA releases such as SimCity and Battlefield can be addressed ahead of time.