Welcome to Sonic Saturdays! In this little section, we discuss Sonic the Hedgehog in all media!Â 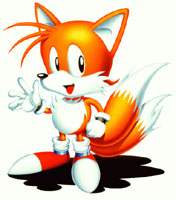 In light of Sonic 4:ep. 2 game-play footage, (which can be seen here–> http://www.youtube.com/watch?v=lCYbmTL_fTMÂ ) here’s a spotlight on Sonic’s Â twin-tailed bro, Tails!

Yasushi Yamaguchi, originally the main artist and zone designer for SonicTeam, designed Tails to be a side-kickÂ to the speedy hedgehog. Miles “Tails” Prower debuted in Sonic The Hedgehog 2 in 1992 on the Sega master System and the Genesis. If you haven’t figured it out by now, his name is a pun for Miles per Hour.. but Sonic gave him the nickname Tails for short, and he’s been in every Sonic game since. 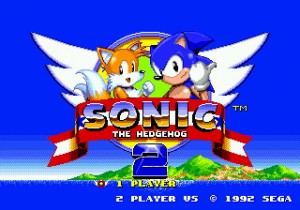 He even had a few of his own on the Sega Game Gear. 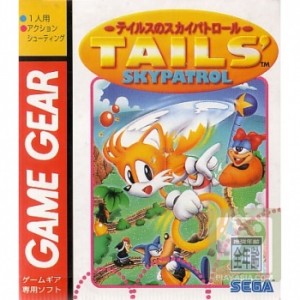 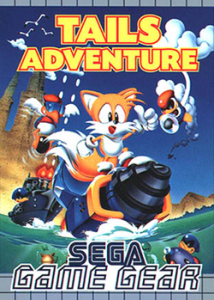 Also, in the Genesis titles Player 2 could control Tails, and here’s a bonus, He can’t die, as long as sonic is on the screen with him. When Sonic3 released, you could control Tails’ Flight so you could get Sonic to higher places than he could normally get to. Another perk of being Tails is he can swim in Sonic 3, and Sonic &Knuckles. 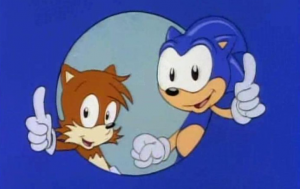 In Adventures of Sonic the Hedgehog, Tails was depicted with brown and cream colors asÂ opposedÂ to his orange and white from the games. They also made him younger. He co-starred with Sonic. Sometimes he would get into trouble, such as being kidnapped by Robotnik, and of course Sonic had to save him. This series was more of the goofy/Punny style. If you are interested in checking it out, it’s on Netflix.

In Sonic SATAM, Tails played a more supporting role. Again he seemed younger. He was mainly a refugee who lived in the secret underground village of Knothole. Â In Season one he’s being taken care of by Princess Sally, and is in training to become a Freedom Fighter. He wasn’t really in the show too much actually. 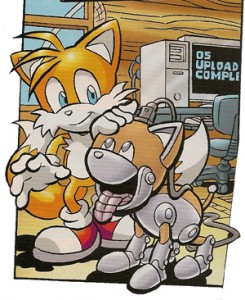 In Archie’s Sonic The Hedgehog and Sonic Universe, Tails has been many things. An orphan,Â The Chosen One, Pilot, Mechanical Genius, and Â Freedom Fighter! He even had his own mini-series with the Downunda (Australia) Freedom Fighters in 1995. More recently he had a solo story-arc with the now wed Bunnie, and Antoine, in the Sonic Universe book. Â That Arc introduced the Battle Bird Armada and the Battlekukus from Tails’ game gear games to the Archie Sonic world. 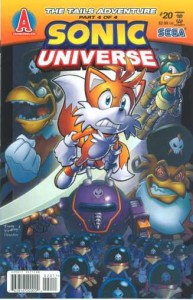 He also has a super-form or two. One of them is Turbo-Tails. This one is an adaptation of what happens when you Lock-on Sonic&Knuckles to Sonic The Hedgehog 3 and gain all the Super Emeralds with Tails. He gains a fewÂ invincibleÂ birds that attack things around him, and a glowing sparkle. In the Comics This superform was used toÂ fulfill a prophecy called the “Great Harmony” by sending all the Chaos Emeralds in the universe to the Zone of Silence.

The other Super-Form is a bitÂ weirder. Â A Chaos Emerald fueledÂ villainÂ namedÂ MammothÂ Mogul,Â Using his near omnipotent abilities, proceeded to devastate the multiverse. Alerted to this threat by Zonic the Zone-Cop,Â Tails merged with innumerable alternate versions of himself to become Titan Tails, who defeated Mogul and sealed him in his Chaos Emerald. 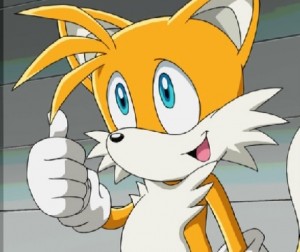 In closing, Tails is very intelligent, though he is a little naive. Â He also becomes angry when people patronize him or mock him for his youth, since he feels he has enough experience as a Freedom Fighter to be held in highÂ regard. He is very caring and thoughtful of his teammates. Also, his confidence has grown as a result of his various solo adventures and accomplishments as a Freedom Fighter.