Welcome to the 2nd of our Sonic Saturday featurette. As I said during the first installment, there is really no set schedule for these posts, but they will be up on a Saturday or it defeats the purpose of Sonic Saturdays!

Anyhow, this week’s post comes to us from our good friends over at Netflix, who have been gracious enough to add Sonic Underground to their Insta-watch line-up. Now, I am familiar with the concept of the show (And the all too catchy theme song), but have never actually seen an episode of the show. So when bored one night browsing Netflix, I saw the show was up and had to check out the pilot. My thoughts follow! 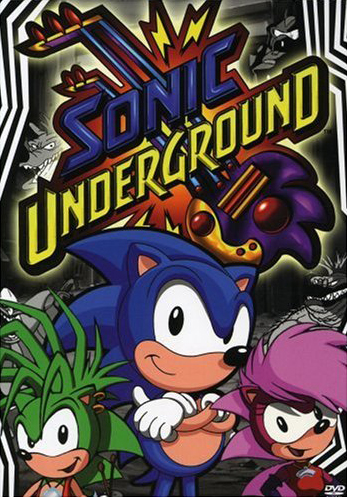 The first thing you’ll notice, or at least I did, is the theme song is actually pretty catchy. No where near as catchy as Sonic: SaTaM, but that’s a subject for another day! Anyhow, this is what I consider a throwback to the 80s theme song, in which is spells out the entire plot of the series to you in a song. It is something I really kind of first noticed with G.I. Joe, but a lot of cartoon theme songs do it. I guess they figured kids aren’t smart enough to grasp the concept of an over-arching plot?

Then we get into the actual episode, and the tone for the serious is actually pretty dark. We see that the world is pretty much controlled by Dr. Robotnik, and to build his army he turns his captors into robotized minions. Then, as all good shows, there’s prophecy prophecized (I think that’s how its said) that foretells of 3 kids who will have the power to dethrone Robotnik and bring peace to the world.

Sadly for the people, these kids are just being born… and their mother is the Queen… Fearing for her and her childrens’ safety, the Queen splits up her children to be raised in different parts of town. One goes wrong, and gets snatched up by a thief. We skip ahead several years, and the babies are now full-on annoying tweens (we aren’t specifically told how old they are!)

Now a lot of you may be wondering at this point, where does Sonic fit into all of this? And wouldn’t you know it, Sonic is one of the three kids in the prophecy. And this is the part that kind of makes the series infamous with a lot, is giving Sonic a duo of siblings (because let’s face facts Sonic doesn’t have a big enough list of secondary sidekicks), and the next part.

You see when they were born, each of the children were apparently granted a magical medallion, which grants them bad-ass musical skills (or so the show leads us to believe, the music is whatever) and some special abilities. Yes, Sonic Underground is about a group of siblings traveling with magical musical instruments to save the world. Even for Sonic, it is a bit of a stretch, and REALLY out there for what you expect from a Sonic franchise tie-in.

Though you have to wonder, why SEGA didn’t use the success of Rock Band to turn this cartoon into a viable video game!

The show as a whole wasn’t that great, but being a video game cartoon series, the bar is set pretty low in general. The first episode really didn’t leave me with a desire to watch more, but this is Sonic Saturdays so I have to fill out the weeks somehow!

Thanks for joining us this week!