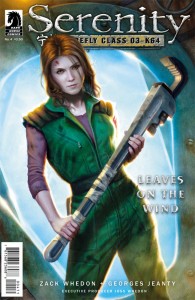 Dark Horse is publishing the next issue of the Leaves on the Wind limited this week, and if you’ve read my other reviews for this arc, you know I’m excited about it. As expected, the creative team remains the same, captained by Zack Whedon. The limited series has been quite tumultuous in its care of the Firefly universe so far and this week’s is shaping up to be no exception.

After the slightly different approach to the art in the third issue’s dream sequence, we are back to the standard feel of the comic in issue four. The inks are heavy, but in a way that I feel is complimentary to the story. They tend to let the colors do the majority of the minor shadowing and depth, while the inks tend to give more of an ominous and darker feel to the art. The pencils are decent, although they still occasionally fall into a very minimalistic style for objects or people at a distance, which can sometimes be underwhelming.

The hero of the art, however, is definitely the colors. This issue has the characters in a number of different places, including outside on a handful of worlds, in laboratories, penal colonies, and a snowy mountain retreat. The color palette gets quite a workout, due to the sheer number of locations the arc travels through in so few pages. That said, the colors do a wonderful job of adapting and making each place identifiably unique. Sihnon is a mix of lush green flora with a searing red sky, while an unnamed penal colony is awash in a haze of dust and baby blue skies.

We are also most certainly in for a ride with this issue, although that’s not any different from the rest. One thing I can say with confidence about this limited series is that things are definitely happening. I don’t find myself disinterested or feel that the state of the characters is ever static or boring. I’m not going to give anything away, because there are just too many unexpected developments in this one. Really, the only negative comment I have is that I do find myself sometimes feeling like the scenes are cut off a little too quickly. This doesn’t come as a surprise, as comics give us a very limited set of pages for episodic storytelling. There are simply so many threads running in this arc, and each thread is life and death important to the characters, that I sometimes feel as though not enough time was spent with the previous thread as we transition to the next. As far as complaints go, however, “I wish there were more pages so that I could read more of this” is a pretty good one to have about a comic.

I’m hoping that any Firefly/Serenity fans would already be reading this series, but if you have somehow missed it, now is the time to go get the back issues and catch up. It’s nice to see (most) of the crew all back together in this issue. We are also left with a number of cliffhangers where the stakes are extremely high for the crew of Serenity and their friends… or should I say, allies? You’ll know why when you go get the book. Go! Seriously, go already. I need to talk about this with peoples!