DC’s Weekly series have always been an interesting experiment for me. 52, DC’s first attempt at weekly comics, is one of my favorite arcs in recent memories, and something that actively got me going to the comic shop on a weekly basis. On the other hand, it’s follow-up, Countdown to Final Crisis, left me more angry than I’d like to go into right now. And since then, DC’s weekly series have been hit or miss.

So of course, I was a bit hesitant when DC announced not one, not two, but three weekly series for the year. While Earth 2: World’s End won’t launch until later this year, Batman Eternal began last month and today marks the first official issue of Future’s End, more on that in a second. I figured would give brief reviews on both comics. 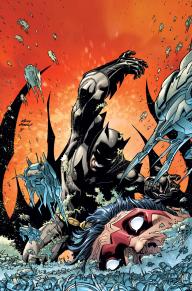 Boy does this book take a twist. This book switches its focus from the more grounded mystery/framing of James Gordon to a focus on how these events are playing out throughout Gotham.

This issue focuses on Red Robin, Vicki Vale, Harper Row and some supporting characters. I’m curious to see where the Vicki Vale story goes. While news is always a great way to advance the story without story-driven exposition, I’m not sure how often she will appear or be important to the story. Though giving her a new-age Internet blogger sidekick does seem to imply they expect to milk the angle a bit more.

Red Robin’s story is a bit more scientifically-minded, and also gives us only Batman appearance of the week. In this, Tim is examining why kids who weren’t infected by Pyg’s drugs were exhibiting similar symptoms. Of course, Tim is smart enough to crack it and this is when the story takes its biggest twist with the form of somewhat organized nanobots. I’m curious to see where this story goes!

Finally, Harper continues her trek into superheroics. And gets to meet Red Robin and Vicki Vale.

The art in this book was mostly solid. Though, it made Tim seem a lot older and taller than I imagined. Sometimes, it’s hard to remember that he is a teenager in this book.

Review: 5 (out of 7) – I prefer the murder-mystery angle they were going with, but understand need to introduce new threads to keep the momentum going for a full year.Â 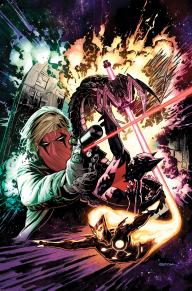 While this is the first issue in the weekly series, it begins right after the events of the FCBD book so if you haven’t read it yet, probably worth tracking down a copy.

Future’s End feels like The New 52’s Worst Hits, and not in the negative way. It seems to focus on teams and characters that have had books cancelled during the New 52 including Mr. Terrific, The Grifter, Stormwatch and Firestorm. It’s nice to see the characters and story at least continue.

Of course, the big star of the #0 and now the #1 is Terry in the guise of Batman Beyond. The only person who actually knows what is going or what is going to happen. He doesn’t have a ton to do in this issue, but his back and forth with A.L.F.R.E.D is pretty funny. I can’t wait to see more of this.

The art in the book works. No major complaints.

Review 5(out of 7) – This is mostly a set-up issue as we are introduced to the main players and the threads that will play out throughout the series.Â

P.S: A note on both books. I think it’s hard to judge the art quality of a weekly title. Partially because it isn’t done by the same artists week to week, and they are given much stricter timetables. I apologize for being so vague about it. But I think the art in both books work well enough.