Puzzle games don’t excite me. Sure, I’ll always look forward to my next Zelda dungeon in a quest or the next Professor Layton puzzle that pops up in the middle of a story, but it’s a more resigned, content sort of satisfaction than it is a thrill. Once in a while, a game pops up that shatters that notion of mine. Portal did as I navigated through the Aperture Science labs with the mind-bending mechanics of a portal gun. Braid did as I learned how to manipulate time to collect hard-to-reach puzzle pieces. And Teslagrad by developer Rain Games fits right in. Here’s why.

Teslagrad is a side-scrolling platforming puzzle game presented with a gorgeous hand-drawn aesthetic. The expressive characters are drawn frame-by-frame, giving you the illusion that you are controlling a cartoon, much like WayForward’s A Boy and His Blob. The environments are beautiful, and the game runs at a solid frame rate without taking any hits when action gets intense. Also especially notable is the game’s moody soundtrack, which makes for perfect background music as you think your way through a particularly difficult room, and provides appropriate changes in tone as the story progresses.

While not essential to enjoying the game, Teslagrad does provide a compelling story for those that choose to follow it. From the opening scene, the narrative is explained through wordless cut scenes as well as through rooms you find which portray backstory through puppet theater-style productions. I felt the story was great to watch and follow, and it keeps you interested through the conclusion of the final boss. 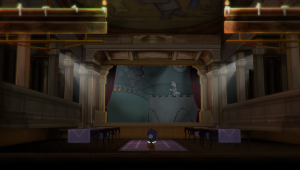 The game itself has you making your way through the top of a very large tower, which serves as a sort of centralized hub. The rooms attached to the tower hold platforming and puzzle challenges that increase in difficulty and variety as you progress through the game. To ascend the tower, you’ll navigate through these rooms, which will ultimately loop back around to a higher area of the main tower/hub itself. Each “section” offers a new, unique puzzle mechanic that has you scratching your head as you figure out how to advance. 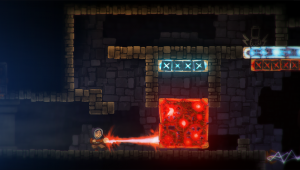 In the earlier parts of the game, you’ll simply change the polarity of movable platforms by punching them with a magic glove. Blue platforms will attract red platforms, and vice versa. Like-colored platforms will repel each other. For example, if there are two platforms stacked on top of each other blocking your path, you can make both platforms red and the top one will fly to the ceiling, opening your path. The puzzles become more complex as the game progresses and as you collect more items. Eventually, you obtain abilities to magnetize yourself, magnetize objects from a distance, and more. Mastering each of these abilities gives you the “aha!” moments that make these types of games so special. The lightbulb that goes off when you discover what to do in a particular area gives you that special Jesse Pinkman moment that I may or may not have replicated a few times in my playthrough.

What isn’t as satisfying is the trial and error style of play that the bosses employ. The game is overall very forgiving with death, as biting the dust will start you at a checkpoint not far from where you die. However, the bosses are another story, for better or for worse. Your character isn’t the strongest in video game lore, as taking one hit from any type of enemy will down him instantly. This includes the very difficult bosses. I’m torn in making a judgment here, as the bosses are inventive and satisfying to beat, but they are unforgiving to a fault.

Each boss has about three phases, each providing a small twist in the method of taking them down. The bosses themselves utilize attacks that can and will catch you off-guard, resulting in death after death after death. Had the game let your character take a couple more hits before succumbing to death, it might not be as frustrating, but chances are, you’ll die a few times in each phase during the more difficult fights. There’s a balance to be found here, but Teslagrad just misses it. Fighting a difficult boss and coming out on top should result in a feeling of triumph, but after a few too many mistakes where you start back at the beginning of Phase 1 of a fight, there’s more of a feeling of muted resignation when you finally do win. This, of course, may change for the highly skilled player, but it will be more frustrating for newcomers to these types of games. 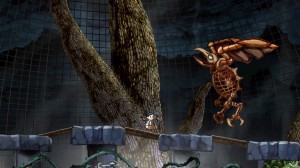 Teslagrad will last you between 3-6 hours, depending how quickly you’re able to solve the puzzles it contains. In addition, there are 36 optional hidden scrolls that will net you a secret ending if you obtain them all. Some are expertly hidden while others are easily seen but require a high amount of skill. You probably won’t net them all on your first playthrough, but after mastering the concepts of the game, you may be encouraged to try for a second playthrough.

As far as Wii U functionality goes, you’ll have to play the game with the GamePad. You’ll either be able to use the screen as a general map (though it only shows you the room you’re in by slowly fading that room in and out), or you can play the game completely from the GamePad screen itself. This is standard GamePad functionality for most games, but the utility of it goes a long way.

Review: 6 out of 7
Ultimately, despite a few frustrations with boss difficulty, this is a unique game that is more than worth its $9.99 price tag. It brings new ideas to an industry that’s full of gritty shooters, standard platformers, and yearly sequels. As I played it, my roommates gathered around to watch, and said the word “wow” as each different unique gameplay mechanic presented itself. Yeah, bitch. Magnets.

24 year old Texan who is grudgingly buying every good looking handheld that Nintendo throws out there. I usually smell pretty good. Follow me on Twitter @anthonygerhart.