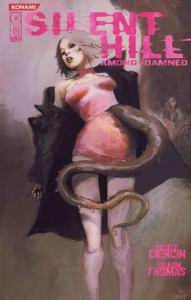 As you may recall with my analysis of Silent Hill: Dying Inside, I am of the mindset that Scott Ciencin can’t write a solid Silent Hill story arc because he fundamentally doesn’t understand Silent Hill’s modus operandi. The biggest strength of Silent Hill is the feeling of absolute isolation that a town which is completely indifferent and heartless towards your presence can generate. Silent Hill doesn’t care about what you look like on the surface or how you got there; it’s just an abandoned town that has the uncanny ability to bring up your past. It doesn’t try to kill everything that enters it and the people who do see creatures don’t typically see the same ones. You can’t take things like Pyramid Heads, Sexy (Bubble Head) Nurses and Lying Figures and shove them in every panel when they hold no significance to the people exploring Silent Hill. The most defining thing about this franchise is the how the town pulls people in and forces them to face what they’re trying to escape. If you can’t understand Silent Hill’s motive, how are you supposed to write a compelling and sensical narrative?

To be blunt, Ciencin delivered a comic devoid of Silent Hill. No characters were relatable (or even likable), dialogue was vulgar and excessive, symbolism was weak, franchise staples were referenced to hell, artwork was muddy, and (worst of all) the story itself was forgettable. To say I disliked ‘Dying Inside’ would be a thorough understatement.

Scott Ciencin returns to Silent Hill with ‘Among the Damned’ (2004) – the first of his “Three Bloody Tales” comic mini-series. In this one-shot, stand-alone drawn by Shaun Thomas, Ciencin has a chance to make a lasting impression on the Silent Hill universe while also avoiding the missteps he took with ‘Dying Inside’. Does ‘Among the Damned’ stand up as the first comic worthy of the Silent Hill name or is this yet another disappointment from the IDW publishing group? Today we’ll find out.

This is the first of Ciencin’s works to present a likable protagonist. We open on a former soldier (Jason) dreaming about beautiful mountainside and the destruction of his military unit by a set of what seem to be Silent Hill creatures. The dream ends with him saving his friend and being ambushed by a creature that seems reminiscent of Silent Hill: Origins’ ‘The Butcher’. As you might imagine, our protagonist has PTSD and survivor’s guilt. Jason wakes up and mentions a woman named ‘Dahlia’. This kinda scares me. For those who need a refresher, Dahlia Gillespie was a prominent member of The Order in the first Silent Hill game and leader of the Sect of the Holy Woman. Being a primary antagonist in the Silent Hill universe, the mention of her name off-the-cuff (without any context) had me more than a little concerned, but I digress. Among the Damned’s Dahlia is simply a musician gone missing – there is oddly no connection between this Dahlia and Dahlia Gillespie.

A couple weird panel transitions later, Jason explains to a beautiful blonde girl at the motel he’s apparently staying at that he only needs enough strength so he can reach the top of the mountain (from his dreams) one last time and put a bullet in his head. This woman is Dahlia. In this continuity, she is both a citizen of the town and a famous singer. Jason continues to travel towards the mountain and after another fractured panel (what time period are we in?), Jason crashes and flips his car. He assumes that fate wants him to reach the mountains.

Our hero thinks he saw someone dart in front of the car before the crash – a plot-point that sounds pretty reminiscent of the first Silent Hill game’s opening. Naturally, he walks on foot to find a police station until he realizes that the town is abandoned. Upon reaching the station, he sees some creatures standing over the corpse of some cops. Jason doesn’t think that they’re real as he saw the same creatures attacking his military unit in his dreams, but decides that IF he were to die he’d rather do it by his own hand. He grabs a shotgun and starts to take down the creatures JUST as Dahlia shows up in the distance. A larger group encroaches on the couple once Jason reaches Dahlia in the amusement park and Dahlia gets stabbed from behind with what looks like a massive serrated sword. Enraged, Jason shoots to kill and drags Dahlia away. The two retreat for what Jason referred to as a “More Defensible Location” (as a reference to his military days).

This act really speaks to why the reader is able to connect with Jason. Being a former soldier, our protagonist is skilled enough to handle himself in a crisis situation and brave enough to save others in need. He isn’t happy with his life, but that doesn’t hamper him doing what is right and looking out for others. He’s reasonable, responsible, and respectful – a powerful combination for any visitor to the quiet, yet hellish town of Silent Hill.

While the creatures are on the chase, Jason turns to Dahlia and asks to see her wound. She is resistant for some unknown reason. While Jason’s back is turned, we learn that Dahlia is actually a monster of the town. This is where things start to deteriorate for the comic. Heavy weaponry is used excessively by one of Jason’s dead, zombie-like friends (Aaron) as the two continue their escape on foot – not questioning what they just saw.

The couple find a refuge of survivors and notice that the monsters aren’t coming in despite a wide opening in the perimeter. These survivors gush over the famous Dahlia’s appearance and Jason asks why the creatures of the town aren’t trying to get in. One of the survivors claims that they are being kept-out by a mystical sign etched in blood. I’m almost astounded with how much this concept actually feels like a genuine part of the Silent Hill universe; the Seal of the Metatron has been used in the past to control the power of the town and the use of a seal to ward off creatures is a brilliant idea. However, the seal that they use is not the Seal of the Metatron, but the Halo of the Sun. Weirdly enough, this has only ever been used a symbol of the town’s cult; never before has there been any reference to the Halo of the Sun acting as a ward.

Before Jason can ask anymore questions, Dahlia collapses and begins to mutate. Jason goes in to check on her and she alludes to how turned on she is by him. As opposed to running the hell away from the clearly insane and monstrous Dahlia, Jason leaves the next morning holding her hand. In the distance, Aaron and the rest of Jason’s squad approach the two while chanting, “It’s time.” Dahlia and Jason run to a nearby church as monsters follow suit. She rips out her heart (to “keep him safe”) and presents it to Jason after mutating again. Dahlia commands the creatures to halt and throws Jason out of the window towards his former military unit.

It turns out that his former zombie-fied military unit was not there to kill Jason, but are actually trying to escort him out of town. It is revealed that Aaron was the one who was supposed to survive the slaughter of their unit and bargained with the town to keep Jason safe. Jason’s unit explains that he was the best of all of them and deserved to live.

The comic concludes with Jason meeting up with Dahlia on the Mountain and deciding to “give it a try” together. Is Dahlia still a demon? How did she get there? Did the town want her to get together with Jason? Are the people trapped in the town going to be okay? Ciencin doesn’t care about these questions, so I won’t care about their answers.

Recommendation: Borrow– ‘Among the Damned’ definitely sucks, but it sucks significantly less than Ciencin’s other works. The comic is bolstered by Jason’s character and the strong art direction, but writing is just as contrived as ever and the symbolism implemented is like a punch to the face. Franchise characters exist in name only, creatures from the games are shoehorned into almost every frame, there is still a significant amount of WTF moments that are never alluded to or explained, and the ending doesn’t make a lick of sense. I still feel like this one-shot isn’t worthy of the franchise, but I would at least recommend a read. Shame I can’t say the same about Ciencin’s next release.