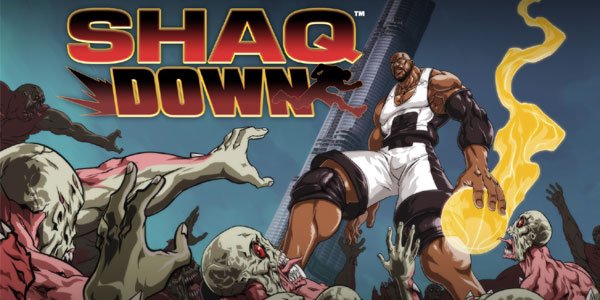 ShaqDownÂ is an iOS and Android game featuring auto-run mechanics, mutant zombies, and legendary basketball player Shaquille O’Neal. I’ll allow you a moment to double take and re-read that last sentence, but that’s about as simple as I can lay out the premise for this game. While not the Big Diesel’s first foray into video games, the seemingly random, disparate elements make up the theme are so ridiculous that it’s actually somewhat intriguing. Unfortunately, actually playing the game leaves much to be desired, causing initial amusement to fade to shallow repetition. 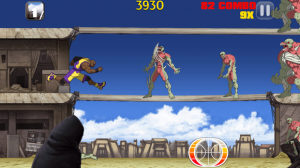 The game begins with a foreboding introduction video that summarizes the canonical backstory. An unnamed virus broke out and turned most of the human population into zombies, and then mutated to make them sentient and sinister, enslavers of the uninfected survivors. In this post-apocalyptic setting, Shaq–mythically referred to as “Dunkman” and the “Justice Bringer”–is a hero that single-handedly resists the zombies by laying a “ShaqDown” on them (yes, seriously).

The premise is absurd and cheeky, but just over the top enough to be funny and interesting. However, the empty shell of a game that follows doesn’t do much of anything with the world it sets the tone for, nor does it capitalize on its protagonist. The in-game Shaq character is given just a handful of throwaway lines, and unlike his notoriously thick-framed namesake is ripped like a linebacker. The only references to real-life Shaq at all are the signature goatee and an ability to throw zombie-slaying “free throws,” although the digital Shaq apparently doesn’t suffer from a 53% free throw percentage. 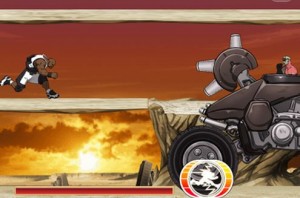 The base mechanics boil down to a fairly generic side-scrolling auto-run. Shaq automatically runs left-to-right on the screen while the player uses swipes to direct the Justice Bringer up and down through the three tiers of platforms Shaq uses as running lanes. He attacks basic zombies simply by running into them, while a tap on the right side of the screen launches the aforementioned free throw attack directly ahead. Developer Hiptic Games tries to mix up the monotonous mechanics by introducing “unstable” zombies that must be hit with a free throw before being tackled and armored zombies that can’t be damaged at all with the normal attacks and must be avoided. Getting through the horde of mutant zombies eventually fills up a special meter, allowing Shaq to perform a more powerful attack such as a “kamehameha!“-style laser beam or an brief period of high-speed invincibility akin to Samus Aran’s Speed Booster in the Metroid games. Fairly basic boss battles punctuate each of the three levels by offering a slightly difference obstacle to the stream of mutant zombies, but ultimately feel just as shallow as the meat of the game. 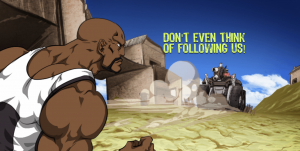 It feels as if Hiptic tried compensate for its lack of variability in the experience by ratcheting up the difficulty to a frustrating degree. While the mechanics appear simple enough, in practice it takes some quick and twitchy swiping to get to the end of the drawn-out levels where the boss awaits. Just a single hit from a boss’s attack or a single contact with an unstable or armored zombie is apparently enough to vanquish the fearsome Dunkman, sending the player to a game over screen and prompting them to start the monotony all over again. Each of the three levels swipes out some backdrops and raises the difficulty even further, but adds nothing material to the boring design. Compounding the frustration are touch controls that flip flop between being not very responsive and being over-responsive, leading to numerous cheap deaths that force the player to slog through the level from the beginning.

Rating: JOKER — There’s nothing aboutÂ ShaqDown that stands out in a crowded mobile gaming market. The celebrity title will pique some interest and those who enjoy B-movie plots that are so derivative and cheesy that they become amusing might be able to appreciate the ludicrous premise, but there is such a disconnect with the actual gameplay that it won’t matter. Even worse, that gameplay just flat out isn’t interesting, providing for largely uninspired and repetitive fodder that doesn’t take any advantage of the brief glimpses of life previously mentioned. Even at just $0.99, this game is not recommendable–and that speaks volumes (unlike the titular character).