Electronic Arts has barraged quite a marketing push for BioWare’s trilogy-concluding epic, Mass Effect 3. Among the usual stable of ads, space-travelling copies of the game, an art book (with DLC), action figures (with DLC), and two other iOS apps, Mass Effect: Infiltrator (released the same day as its console sibling)Â has one thing to say for itself: it’s a game, too. BioWare has already experimented with putting their sci-fi epic onto Apple’s devices with the lackluster Mass Effect: Galaxy, but this time the studio turned to IronMonkey Studios–known best for their acclaimed iOS rendition of another EA sci-fi property,Â Dead Space–to craft a true mobile Mass Effect experience. While Infiltrator eschews the forgettableÂ Galaxy‘s fundamental problemsÂ and provides for a deep mobile experience, it comes with its own issues and fails dearly when it comes to living up to the name that begat it. 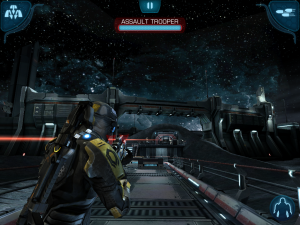 The first thing that jumps out about Mass Effect: Infiltrator is its gorgeous aesthetic. The production quality is phenomenal for a mobile title and the game easily places among the more graphically impressive action games in the App Store. Enemies are beautifully rendered in detail and some of the environments are truly impressive; unfortunately, about 2/3 of the game takes place inside a generic Cerberus base that mutes the art style significantly. As a bonus for diehard fans of the franchise who are currently plugging away at Mass Effect 3, Infiltrator does offer ways to augment the console game’s Galaxy at War mode. Collectible “Intel” can be uploaded from the iOS game to boost ME3‘s Galactic Readiness Rating, which is essentially a multiplier to make “War Assets” more effective in the climactic battle. Additionally, completing Infiltrator‘s campaign will also unlock a bonus War Asset in ME3. The process is quick and painless, requiring only that the player sign in on his or her EA Origin account, and provides a unique level of integration between the two games that is very innovative.

As for the actual game, players turned off by Galaxy‘s cartoony top-down gameplay will be relieved to find that Infiltrator uses the same over-the-shoulder 3D shooting they are familiar with from the console titles. Here the Mass Effect vibe is probably at its strongest as gameplay involves switching between various weapons, hopping from cover to cover, adapting to slightly different enemies, and interspersing biotic powers. 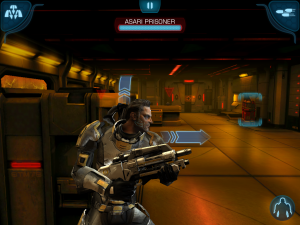 Infiltrator even allows the spending of credits, rather than XP, to upgrade weapons and powers or to unlock new ones. The primary method of movement is a virtual version of Mass Effect‘s twin stick controls, while swipe gestures are used to move through cover and aiming is handled by directly tapping on enemies. Save for the sniper rifle, guns will automatically fire at an enemy that has been targeted while the player can make small aiming adjustments to hit an enemy’s weak spot (usually the head).

Unfortunately, Infiltrator suffers many of the same problems of other games that attempt to graph traditional control schemes on a touch-only interface. While the virtual twin sticks are probably the most comfortable yet in an iOS title, they nonetheless remain totally inadequate in the heat of combat. Once enemies get in close or flank the player, death is nearly guaranteed simply by the fact that it is extremely cumbersome to juggle basic actions in real time. The virtual twin sticks work well in non-combat navigation and even in combat when enemies are at a distance, but are broken outside those instances. The actual combat design exacerbates these issues significantly as it seems to assume the player has a level of control that only a proper gamepad can offer. Having to juggle movement, shooting, biotics, aiming, and cover all at once simply do not play well with the control scheme, and some of the more difficult battles push the player’s patience even further–especially the bosses that have some form of a one-hit kill. 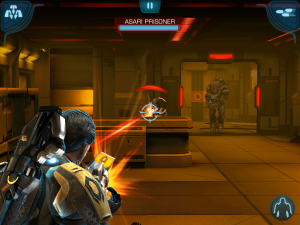 Admittedly, much of the time combat feels fluid and genuinely fun, but too often is it bogged down just because the designers didn’t seem to account for the controls’ limitations.

Of course, while third-person shooting is all well and good, the heart and soul of Mass Effect is story and the ways in which a player can interact with the story. It is in this respect that Mass Effect: Infiltrator is most disappointing. First of all, there is very little story present to begin with. The protagonist, Randall Ezno, is some cybernetically-enhanced Cerberus operative who has a close relationship with one of the doctors at a Cerberus facility. When the director of the facility, which is experimenting with the same enhancements Ezno has been implanted with, abducts the doctor, Randall goes rogue in an effort to save her. The entire tale is hollow, generic, and uninteresting, lacking any sort of narrative depth in plot or characters. It is mostly told in voice-overs that play as Randall walks through linear hallways from one combat scenario to the next. There is no interactive dialogue, no exploration (save for finding small deposits of credits), and, worst of all, no sense that this tale is in any way connected to the over-arching Mass Effect universe. It is a completely inconsequential blip that does nothing to add to the series’ esteemed lore. Even IronMonkey’s half-hearted attempt to implement the signature Paragon/Renegade moral dynamic falls flat as it boils down to either killing or releasing helpless scientists, neither of which has any impact whatsoever on the story, the character, or even the Galactic Readiness Rating.

Recommendation: Skip It— Mass Effect: Infiltrator fails to live up to the pedigree of either the series’ name or the developer’s. What starts out as an engaging experience quickly devolves into a game that is repetitive and unremarkable. Gorgeous visuals and a fun touch-based combat system are negated by the game’s dominant rote setting and combat design that totally ignores the controls’ limitations. Most egregiously, a shallow story bereft of choice or interactive feedback make Infiltrator a mostly action-oriented affair that fails to add to the Mass Effect universe in any memorable way. Fans of the Mass Effect series will find themselves sorely disappointedÂ Â while potential newcomers won’t get any semblance of what the series is about or how this game fits into it. For fans, the most attractive part of this game is sadly the ability to bolster the Galaxy at War meta-game in Mass Effect 3, but that is hardly worth the price of admission ($6.99)–you’re better off sticking with the free Mass Effect 3 Datapad app, which has its own Galactic Readiness-boosting minigame.