Review Shooter: Garth Kirby and the Cookbook of The Gods 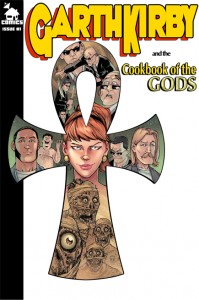 In recent memory, we have had a media fascination with zombies that have extended from movies to TV shows to video games. More recently that has moved over to vampires (and generally by association of the mythos to werewolves) with stuff like Twilight, The Vampire Diaries and True Blood. So it is only fitting that mummies get their time to shine as well.

I don’t want to write or give the idea that Garth Kirby is simply a book about mummies, it is a lot more than that, and I will say that is my biggest issue with the story. Not that it doesn’t solely focus on mummies, but the fact that it tries to spread itself thin to cover all of the elements it introduces in about 40 pages.

The story has three main factions of players. We are first introduced to a clan of ninjas (when aren’t ninjas in vogue), and they are around for a page before disappearing for a bit, but we do know they have acquired something from a museum.

Next, we are introduced to Garth Kirby, a mechanic and the star of our comic. He is dealing with an unruly customer named Arizona Ravencroft, who turns out to be the main antagonist of the book as we go along. The book criss-crossing the interactions between these three factions several times. We see the Ninja Squad deal with Garth, we see Arizona deal with the Ninja Squad and we see Garth and Arizona butt heads a few times.

I feel this is where the limitation of a single issue are most tested. The book has the giant task of introducing us to this world, to these characters, setting up and resolving the conflict all within 47 pages. And it tries its best, but it does feel like a lot of content had to be cut. Not a lot of time is given in building up any single faction. And the threat is introduced and defeated just as quickly.

While thinking over the comic for my review though, I’m not sure what they could have cut to make it fit better in this format. And I realize the problems of independent publishing. There is no guarantee that they’d have a 2nd or 3rd issue to tell their story, which ideally would have helped them to expand on it. Give scenes and characters a chance to breathe.

For example, a character that is key to the climax is really only introduced RIGHT at the start of the climax to be used in the climax. Instead of having the character get some earlier pages so that we kind of have an idea of why he is an easy mark.

Aside from my misgivings with the amount of content provided in the comic. I enjoyed it overall. Its a different type of story. Garth Kirby for the most part is just an average Joe. He doesn’t exhibit any extraordinary traits, or well-trained or even come off as super intelligent. He’s just the wrong guy at the wrong place wanting to do the right thing.

Arizona Ravencroft is smart, cunning and knows how to use her feminine attributes to her advantage. Though, I feel like she is the character who is most effected by the page count. We only get glimpses into her past. Her destroyed romance and obsession that caused her to be booted out of her field. I would have love to see more with this character. She seemed to have an interesting history. Let’s hope that future stories can give me what I want.

The plot for the most part isn’t completely original. There’s an evil artifact out in the world that can raise the greatest evil known to mankind. There are several interested parties, and our heroes try to stop it before the world is plunged into darkness. I’m sure you’ve seen it a thousand times, but there’s something about the characters that really brings up the quality of the book. Sadly, I was a bit disappointed that the Cookbook of the Gods.. wasn’t actual recipes on how to create monstrosities, maybe another comic! 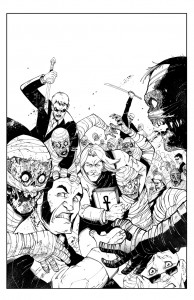 Finally, there’s the art. I’m of two-minds about it. While I have no problem with black and white comics, I think they have their place, and this one does a terrific job with it. The cover image as well as the first page, which are both colored, makes me yearn to see how beautiful this entire book would have looked in color. That said, I am a huge fan of the art on display in the book. All of the characters look distinct and detailed. The environments are nice. Enough detail to give you an idea of what’s going on without breaking the bank on super-detailed backgrounds.

And most importantly, suitable facial emotions. I feel sometimes that’s where comic art loses me when the characters wear the oddest or most bland expressions on their face. This book has some great use of emotions.

Recommendation- Buy I have my problems with the book, but very little to do with the actual book. I feel that the story just didn’t have enough room to properly breathe, but its still a solid tale. And would have loved to see the art in color, but its terrific in black and white. I think its a worthy investment and teases at a sequel that looks to be just as intriguing. So check out Garth Kirby and The Cookbook of the Gods!