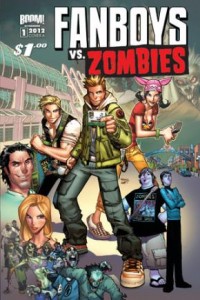 As part of their ChristmasÂ celebration, Comixology has been giving away various comics for free on their app. At first, I assumed it would just be an alternation of DC and Marvel comics that I’ve already read, but was pleasantly surprised to find other publishers getting some love. Yesterday they gave away a BOOM comic called Fanboys vs Zombies, and the name and cover intrigued me. Being free didn’t hurt either. But just because something is free doesn’t mean it is quality, is Fanboys vs Zombies a series worth jumping into (there are about 9 issues out now), we will find out!

Let’s get this out of the way.. yes, it is another zombie thing. Comics, TV, movies, and video games you can’t bowl a severed head around town without running into a product that features zombies. It does get old, but people continue to find new, novel and interesting ways to use these undead creatures.

With that out of the way, the strength of any zombie product is the characters who surround it. In this case, the central characters are a bunch of “Fanboys”. A formerly close-knit group of friends who attend San Diego Comic Con every year. The writer does a fairly decent job of showcasing their dwindling friendship in a few short panels, but as we get deeper into the issue the relationships and falling outs are detailed a lot more. There is resentment, betrayal, hatred and the odd lingering remorse of losing a good friend all on display here.

Right now, that’s where the comic has me. It has a lot of interesting characters, but more importantly dynamics between these cast of characters. While it hasn’t blown the lid off of all their dirty laundry, you do expect a lot of growth and inner soul searching before this is all over.

The other star of the book is the setting. The San Diego Comic Con, the largest gathering of nerds and geeks in the world, seems like the proper place for the zombie apocalypse to begin. For no other reason than the people here would actually be excited to see it happen. And when it does happen, the main characters freak out for a panel or two, but they quickly spring into action and find a way to get to safety. Once they find safety though, the comic ends with the question.. how do they actually get out? It’s a nice and simple hook, but it works. The final shot of them overlooking the convention center overrun with zombies tells you they aren’t in for an easy time.

Finally there’s the art. This comic has a really clean, colorful and detailed look about it. The characters are all lively and distinct in design and appearance. The backgrounds are drawn with such care and detail that it brings the convention center and panel rooms to life.

Some of the backgrounds are neat little games of “Where’s Waldo” as you check out the costumes, shirts and posters they have hidden in the various panels.

It all comes together for a fairly solid package. Both in terms of the story told and the visual presentation.

Recommendation: Read– It is no longer free on Comixology, but for only a buck you really can’t go wrong checking out. I’ve personally picked up the next few issues!