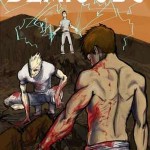 There’s an old expression, “there’s nothing new under the sun.” The expression usually means that there aren’t new stories. Anything that has had, will happen again. I couldn’t help but thinking of this expression while reading Demigods.

The book really doesn’t do anything new, in fact some of it may even be considered cliche, and I feel like that’s the biggest mark against this book.

Let’s start with the basics, and stop me if you’ve heard some of this before. The book is about a government agency that is humanity’s last hope. See before the events of the book, there was a period of civil unrest and chaos on the street. A genius scientist created a formula that would enable certain humans the ability to gain powers, and this was used to turn the tide on crime. In order to create a second wave of super-citizens, the agency Â finds orphans and recruits them to the agency. Shock of all-shocks, it turns out that the government agency may not be on the up and up. A team of teens are busted out of the facility, and I’ll leave the rest for you to discover.

The entire time I was reading this, I was hoping or expecting a twist or turn that would actually shock me, but really everything played out as expected. No moment really stood out as new or unique. That isn’t always a bad thing, but when you are trying to launch a series it would really help.

The art in the book is actually pretty rock solid. The colors are nice and vibrant. The characters are all unique looking and pop off the page. The only criticism I would say, and may not be the artists fault, is the uniform of the agency agents and the rebel force were a bit too similar so it made for one confusing action piece during the middle of the book. Other than that, some solid work all around.

Recommendation: Wait– I don’t want you to pass on this book, but I can’t in good faith also tell you to buy it. Instead, I simply advise that you want to see how the book unfolds. Perhaps later issues will make the series feel less by the numbers.