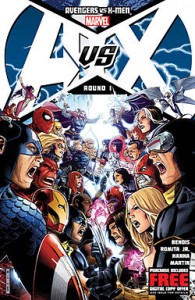 It’s finally here. The summer event we’ve all been waiting for: Avengers vs. X-men. There’s a lot of hype behind this comic, through stories of pre-orders hitting over the 250,000 mark, to people already labelling the biggest story ever.

I have to say: it is a good comic.

People are, understandably, tired of events. ‘Event fatigue’ is something that’s passed around both the interwebs and comic conventions a like. But when you hear the words ‘Avengers vs. X-men’, superhero fans everywhere can’t help but get excited. It makes perfect sense for Marvel to do this story now. Both teams are very popular outside of movies and this story and event has a real opportunity to appeal to new readers.

The story comes from the minds of Marvel’s Architects: Brian Michael Bendis, Jason Aaron, Ed Brubaker, Matt Fraction and Jonathan Hickman. Because of their history on their respected franchises, the main two driving forces behind the comic are Aaron and Bendis, which is why this first issue is scripted by Bendis himself. Its premise is simple: The Phoenix Force is returning to earth.

There’s a lot of history behind the Phoenix Force in the Marvel Universe, dating all the way back to the 60’s and 70’s. But it’s been off the map for a while, and never been used in a story this size before. It’s heading to earth, and it’ll either bring rebirth for the mutant species or raze the planet to ash. It also needs a host, and at the moment, it’s looking very likely that that host will be Hope Summers, the mutant messiah. 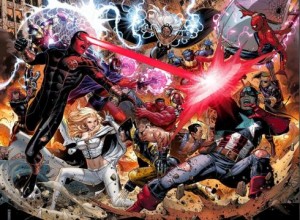 The first issue is very good at setting up all this. It is pretty much an issue of set up, bit since it’s part one of a twelve part story, that’s pretty forgivable. I think the last few pages will hook readers into coming back for more, because it looks like we don’t have to wait long for the “vs” part of the story.

The art also needs to be mentioned, since this is a very pretty book. John Romita became artist of The Avengers at the start of The Heroic Age, but there was always something off about his work. It would look clunkier or messier than usual, which is kind of his style, but it didn’t have the fine finishes too it. This comic is the complete opposite. It’s John Romita Jr at his best. The inker (Scott Hanna) and the colourist (Laura Martin) are two of the best in the business at what they do, and they really help JrJr’s art come to life and help it look great on the page.

By the time I was done reading, I had a huge smile on my face. The 8 year old me was happy, and so was the 20-something year old me. Good comics.

New Reader Accessibility: 5. Issue 1. Round 1. Pick a side. Enjoy the ride!

Recommendation: Read it. All your friends will be reading it, do you really want to be the one left out?