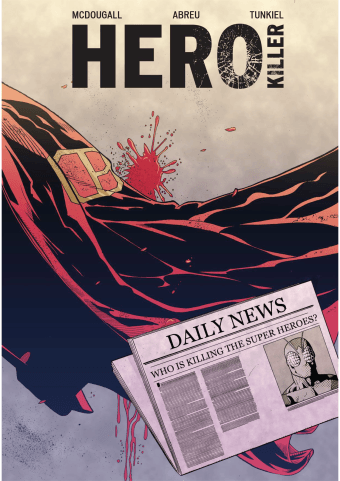 I felt like I read a better version of Hero Killer #1 this week, and it was called Brian Michael Bendis and Michael Avon Oeming’s Powers. The basic premise of the comic from writer Tony McDougall, artist Martino Abreu, and colorist Justyna Tunkiel is that a thinly veiled Spider-Man analogue, the Bug, has been killed and dismembered. Hard nosed police detective Shelly Marquez won’t stop until she’s found the killer, but the investigation is pre-empted by the superhero Captain Power and the Feds.

Marquez is the only character to have any real personality in the issue, and most of McDougall’s writing is focusing on advancing the plot instead of give the already sprawling cast of characters any kind of personality. Honestly, the unnamed hero killer is probably the most interesting one of all even though McDougall and Abreu lay out exactly how he did the murder instead of spreading the love and keeping readers guessing. So, maybe Hero Killer isn’t really interested in being a mystery or procedural comic. But it is a good superhero one?

Abreu’s art and Justyna Tunkiel’s are fairly easy on the eyes, especially in the shadow covered closing sequence of the comic where Marquez explains how the “hero killer” went to work and took down a big time superhero. The reds and blacks make the page look like an abbatoir, and these scenes also bring out some of McDougall’s better writing as he revels in the sadism of this “hero killer”. Abreu’s has skill with anatomy and drawing powerful characters, and his style could fit in with any Big Two superhero comic. However, his character designs are pretty derivative, especially with the “Cowled Knight”, who acts and look exactly like Batman. Except Cowled Knight doesn’t have any of Batman’s swagger or even his neuroses and exists to deliver crime scene exposition to the more punching happy Captain Power.

A good word to describe Hero Killer is flavorless. There are dozens of superhero murder mysteries and stories featuring cops in superhero comics from Watchmen to Identity Crisis, Gotham Central, and the aforementioned Powers. Unfortunately, Hero Killer doesn’t differentiate itself from these comics except by making its killer utterly sadistic and twisted and giving most of the mystery’s clues in the first issue. Creator owned superhero comics have a tough uphill battle in going against the Marvel and DC Universe, which have been established and fleshed out for over seven decades, and the way to win this battle is to have strong visuals and interesting characters.

Martino Abreu and Justyna Tunkiel win in the first category, but the they and Tony McDougall fall quite short in the second one with all the narrative captions and dialogue focused on explaining or advancing a plot that has been done in a much better way in comics like Watchmen #1, Powers #1, or more recently Plutona #1. On paper, Hero Killer #1 has a possibly interesting concept or antagonist, but its execution is lacking, and it doesn’t really stand out in a market already saturated with superhero stories.