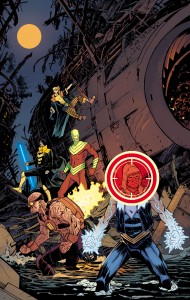 There is honor among thieves or so they say. When it comes to DC that motto runs truest through the Flash’s rogues gallery, which has taken to calling themselves, The Rogues. With the events of Forever Evil going on, The Rogues must decide if the are on the side of the Syndicate or ready for a fight and thus Rogues’ Rebellion is born!

Taking place after Forever Evil 2 and some of the Villains Month books, Rogues’ Rebellion starts off with The Rogues returning to Central City to find the city ablaze and men and apes killed and their heads on spikes. It isn’t a pretty picture. The Rogues attempt to get a clearer picture of the situation, and after rescuing some cops (honor and all that) they discover Grodd is behind the wreckage in Central City.

Before they can track down Grodd though, Captain Cold wants to visit the local hospital to check on his sister and that’s when the Syndicate’s first wave attacks. This is a truly fun fight to see play out because The Rogues simply outclass their opponents, but also because it’s cool to see villains fighting for something other than being evil. Also, the fight highlighted all The Rogues and their powers in a great way.

This was all held down by the great art. There are some panels that really are a treat for the eyes. And some intense close-up of faces that I’m always a sucker for. You know you can tell a lot about a man/woman by their eyes.

Review 7 (out of 7) – I’m not always keen on tie-in books, but Rogues’ Rebellion was a great read.. Also seems like a great kick-off to the mini-series. I recommend picking it up.Â