Review: Borderlands: The Fall of Fyrestone #1 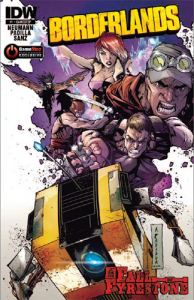 I’ve said before that prequels are a tough beast. Trying to etch out a compelling story in-between elements the audience knows has to happen and things that could never change. Borderlands is already looking to the prequel route in the video games, but that is working out by introducing a new cast of characters. Borderlands: The Fall of Fyrestone on the other hand, serves as a prequel to the first game.

Though “prequel” may be a generous term in this case. I will be honest, it has been a few years since I’ve dipped into the original Borderlands, but this book feels like a stretched-out re-tellings of the events at the start of the first game.We see the Vault Hunters, Brick, Lilith, Roland and Mordecai, reaching the planet of Pandora. They are attacked by bandits, but do quick work of them, and decide to go after Nine Toes, the first boss of the game.

The book lacked any spark or any added twist to make me consider reading more of it. Especially as someone who has played through the original game, more times than he would like to count.

The art works, and I dug the visuals of Lilith’s phasing abilities, but that was the extent of it standing out.

Review 4 (Out of 7) – This isn’t a bad book at all. But as a fan of Borderlands (And honestly who else is picking up this book?), it does nothing new or exciting. It’s a longer version of the game’s opening mission.