The Playstation Experience had A LOT of games to play, so much so that even if you went, there was no way you played them all. The Order, Destiny, and Bloodborne all commanded 30 minutes + wait lines, and good luck trying to play any Morpheus titles. So I decided to just check out most of the indie games at the show! Following are some quick impressions broken up by game in the general order I saw them in so you can live vicariously through me. At the end I’ll give my impressions of the show in general including special appearances from internet celebrities!

Dragon Fin Soup was described by the guys at the booth as a tactical action RPG with rouge-like elements. It has a grid like world, which is common in these type of games. I didn’t find the art-style too appealing. It was a super-stylized form of little Red Riding Hood, which I didn’t really love.It didn’t really stand out, as rogue-likes need to be special for me to take notice, there’s just a ton of them, especially in the indie space.

All made by one guy, Mobeen Fikree, We are Doomed is a twin stick shooter; it’s pretty simple but has a cool art style which reminded me of Everyday Shooter. You pick up shards when enemies are killed which builds a combo meter and the ability to use a super weapon (only one as of now). Kind of wished there was a boost, and maybe some other weapons but for being made by one guy it’s super impressive. Has an endless mode, as well as a wave-based mode. I’m not sure how long this game would keep your attention, but would be really fun on the Vita and if you are into high score arcade style games its one to keep an eye on.

There were a lot of local multiplayer games at the show like Paperbound, so for me to take notice it had to either play super well and or be visually stunning, this did neither.

The Castle Game is a fairly straightforward tower defense game. You have a castle to defend from enemies. The game didn’t have paths for the enemies seen in games like Kingdom Rush, so you could direct enemies a bit, although not as much as I would have liked. In the demo you really only had walls and archer towers; there should be more in the full game though, with active abilities like lightning and fireballs. You could also deploy some warriors with triangle, but you couldn’t build or repair during the attack wave, which I would have liked to have seen, it made the attack phase kind of dull. The game is not incredibly innovative from what I played, and the art style is uninspired if inoffensive.

Color Guardians is an Ikaruga style endless runner, 3 lanes, 3 colors, which you change by pressing a face button. It was actually pretty challenging, the art style was good if not a bit simplistic, but it was actually kind of a hard game, and seemed to have a lot of levels in it, cool mechanic of starting the world gray and by collecting color orbs you bring color to the world 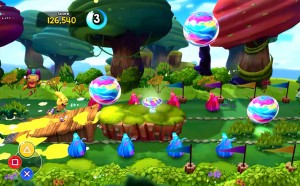 Tinertia is a rocket jump platformer. There’s no jumping, you shoot rockets which propel you in different directions, it reminded me a bit of Splosion Man. There’s actually a lot of things you can do, like wall jumps and hitting switches with your rockets. It gets really hard and is MeatBoy-esque (another popular indie genre) but in 3D.

Super Exploding Zoo has you collecting animals, which are used as bombs to kill aliens. Your goal is to protect some eggs, which are different places on the map, so in a way it’s kind of a tower-defense game. Different animals have different properties, for example the crocodile lets you move across water. Being made by the guys who made Hohokum and Frobisher should tell you why it’s not surprising this had a really interesting art style.

It feels like Nom Nom Galaxy has received a lot of attention so I won’t say too much, but it’s a little like Terraria except you’re mining to make soup which you export to space and make money from. There’s a multiplayer component and tower defense element where other players can send enemies to attack your soup building station, which you can manually defend or set up turrets and other defenses. There’s a ton of soups, which are created by combining elements found in the world. Different soups are worth different amounts of money and the economy is supposed to change depending on the planet and supply of different types of soups. I wasn’t in love with the art style, but the game seems to be the most ambitious pixel junk game to date, and I’m really looking forward to it. 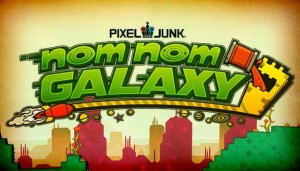 Apparently Aztez has a turn-based strategy element? I didn’t see that at all during the demo, but that seems really cool. What I played was a 2D combo based fighter, similar to Dishwasher. The game has a black, white and red art style that is pretty cool looking. Based solely on what I played it seemed okay, but if the turn-based strategy is fleshed out it could be really cool.

Reaper (or Death Tales?) is a side-scrolling combat game for the Vita. You have cards that you press on to do certain moves. This game didn’t play well unfortunately; it was slow and clunky with a weird artsytle, which was colorful but death-themed. 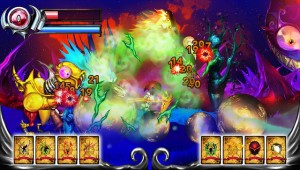 Assault Android Cactus is a twin stick shooter with main and alternate weapons, 8 characters with different weapons, and upgrades that drop periodically. It has multiplayer and/or a co-op component although I only played single player. I didn’t love the 3D Chibi artstyle, but didn’t get in the way. Was relatively easy but really fun in terms of gameplay. Each level was very different, and it had a cool Mario Bros 3 style overworld although there wasn’t much to do on it, at least not in the demo.

Back tomorrow with more impressions from PlayStation Experience and indie games.